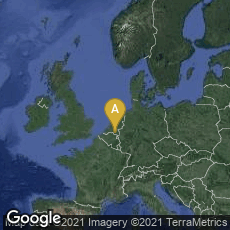 The Compact Disc (CD) is Developed "The first test CD was pressed in Hannover, Germany by the Polydor Pressing Operations plant in 1981. The disc contained a recording of Richard Strauss's Eine Alpensinfonie, played by the Berlin Philharmonic and conducted by Herbert von Karajan. The first public demonstration was on the BBC TV show Tomorrow's World when The Bee Gees' 1981 album Living Eyes was played. In August 1982 the real pressing was ready to begin in the new factory, not far from the place where Emil Berliner had produced his first gramophone record 93 years earlier. By now, Deutsche Grammophon, Berliner's company and the publisher of the Strauss recording, had become a part of PolyGram. The first CD to be manufactured at the new factory was The Visitors by ABBA. The first album to be released on CD was Billy Joel's 52nd Street, that reached the market alongside Sony's CD player CDP-101 on October 1, 1982 in Japan. Early the following year on March 2, 1983 CD players and discs (16 titles from CBS Records) were released in the United States and other markets. This event is often seen as the "Big Bang" of the digital audio revolution. The new audio disc was enthusiastically received, especially in the early-adopting classical music and audiophile communities and its handling quality received particular praise. As the price of players sank rapidly, the CD began to gain popularity in the larger popular and rock music markets. The first artist to sell a million copies on CD was Dire Straits, with its 1985 album Brothers in Arms. The first major artist to have his entire catalogue converted to CD was David Bowie, whose 15 studio albums were made available by RCA Records in February 1985, along with four Greatest Hits albums. In 1988, 400 million CDs were manufactured by 50 pressing plants around the world. To date, the biggest selling CD (as opposed to the biggest selling title) is Beatles "1", released in November 2000, with worldwide sales of 30 million discs" (Wikipedia article on Compact Disc, assessed 01-17-2010).