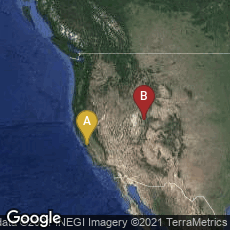 At Evans & Sutherland in Salt Lake City, Utah, from 1975-78 computer scientists John Warnock and John Gaffney developed the "The Evans and Sutherland Design System" for producing 3-dimensional graphical databases both for the Evans & Sutherland CAD/CAM Picture System and for custom-built simulation machines. These graphics systems used a graphics model, developed by Ivan Sutherland and others, based on coordinate system transformations and line drawing.

After leaving Evans & Sutherland in 1978 John Warnock joined Xerox PARC to work for Charles "Chuck" Geschke. At "PARC" he teamed up with Martin Newell to producie an interpreted graphics system called JAM. "JAM" stood for "John And Martin".

"JAM had the same postfix execution semantics as Gaffney's Design System, and was based on the Evans and Sutherland imaging model, but augmented the E&S imaging model by providing a much more extensive set of graphics primitives. Like the later versions of the Design System, JAM was 'token based' rather than 'command line based', which means that the JAM interpreter reads a stream of input tokens and processes each token completely before moving to the next. Newell and Warnock implemented JAM on various Xerox workstations; by 1981 JAM was available at Stanford on the Xerox Alto computers, where I first saw it.

"In the meantime, various people at Xerox were building a series of experimental raster printers. The first of these was called XGP, the Xerox Graphics Printer, and had a resolution of 192 dots to the inch. Xerox made XGP's available to certain universities, and by 1972 they were in use at Carnegie-Mellon, Stanford, MIT, Caltech, and the University of Toronto. Each of those organizations produced its own hardware and software interfaces. The XGP is historically interesting only because it is the first raster printer to gain substantial use by computer scientists, and was the arena in which a lot of mistakes were made and a lot of lessons learned.

"To replace the XGP, Xerox PARC developed a new printer called EARS, and then another newer printer called Dover. After the agony of converting software from XGP to EARS, various Xerox people realized that applications programs generating files for the XGP or for EARS should not be tied to the device properties of the printer itself. Bob Sproull and William Newman, of Xerox PARC, developed a relatively device-independent page image description scheme, called "Press format", which was used to instruct raster printers what to print.

"As part of an extensive grant program to selected universities, Xerox donated Dover printers and made documentation of the Press format available under a nondisclosure agreement. As far as I know, that nondisclosure agreement has never been lifted, though information about Press format has been widely enough distributed that by 1982 researchers at the Swiss Federal Institute of Technology (EPFL) at Lausanne had given conference papers about their own independent implementation of Press format.

"Press format was a smashing success; it revolutionized laser printing technology in the academic and research communities, and stimulated a large number of people to think about issues of device-independent print graphics. Nevertheless, Press format had its limitations, and various people felt the need to revise the basic design.

"While at CMU, Sproull began making plans for a new version of Press that would combine the graphics model of JAM with the page image description properties of Press. Sproull returned to Xerox for a sabbatical leave in 1982, and enlisted the help of Butler Lampson in the creation of the new page image description language that Warnock dubbed "Interpress". The name caught on.

"While it is difficult to separate the contributions made by Sproull and Lampson, it is not incorrect to say that Lampson and Warnock produced the execution model of Interpress while Sproull and Warnock produced the imaging model. It is also approximately correct to characterize this first version of Interpress as being derived from the graphics model and execution model of JAM with additional protection and security mechanisms derived from experience with programming languages like Euclid and Cedar, and a careful silence on the issue of fonts. The trio worked under Geschke's direction, and Geschke was responsible for refereeing disagreements and for making certain that the resulting design was acceptable to the rest of Xerox" (Brian Reid, http://groups.google.com/group/fa.laser-lovers/msg/5d0df32a0e91f1fa?rnum=2&pli=1, accessed 01-07-2009).