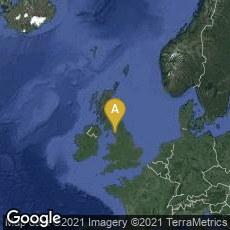 Origins of the Pencil Sometime between 1500 and 1565 an "enormous" deposit of very pure and solid graphite was discovered near Borrowdale parish, Cumbria, England. The substance appeared to be a form of lead, and consequently it was called plumbago, the Latin word for lead ore. The material could easily be sawn into sticks; the locals found that it was very useful for "marking sheep."

The Cumbria deposit was the only large scale deposit of graphite ever found in this solid form, and until the end of the 18th century this deposit remained the only source of graphite for pencils, allowing England to retain a monopoly on solid graphite used for pencils until about 1860.

Other aspects of the early history of the pencil remain uncertain. Simonio and Lyndiana Bernacotti are believed to have created the first carpentry pencil. They did this by hollowing out a stick of juniper wood. "Shortly thereafter, a superior technique was discovered: two wooden halves were carved, a graphite stick inserted, and the two halves then glued together—essentially the same method in use to this day. The black core of pencils is still referred to as 'lead,' even though it never contained the element lead."