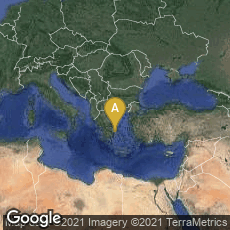 The "Fatal Letter" in the Iliad: Introduction of Written Language to the Greeks Image Source: en.wikipedia.org
Iliad, Book VIII, lines 245–53. From the Ilias Ambrosiana  (Ilia picta). The codex is thought to have been produced in Constantinople during the late 5th or early 6th century, specifically between 493 and 508 CE. This is the only illustrated manuscript of Homer surviving from antiquity. It is preserved in the Biblioteca Ambrosiana, Milan.

In the mid-eighth century BCE the Greeks are thought to have developed their own writing system based on the Phoenician alphabet, along with the use of wax tablets, and the leather roll for writing. The Phoenicians, whose culture was at its peak from circa 1200-800 BCE, were the first state-level society to make extensive use of the alphabet; the Phoenician phonetic alphabet is generally considered the ancestor of almost all modern alphabets. However, it did not contain any vowels; those were added by the Greeks. From a traditional linguistic perspective, the Phoenicians spoke Phoenician, a Canaanite dialect. However, due to the very slight differences in language, and the insufficient records of the time, whether Phoenician formed a separate and united dialect, or was merely a superficially defined part of a broader language continuum, is unclear. Through their maritime trade, the Phoenicians spread the use of the alphabet to North Africa and Europe, where it was adopted by the Greeks. The Greeks later passed it on to the Etruscans, who in turn transmitted it to the Romans. In addition to many stone inscriptions, the Phoenicians are believed to have left numerous other types of written sources, but most have not survived.

The earliest surviving examples of writing in Greek are on tablets made of metal. The first reference in written Greek literature to writing tablets appears in Homer, and in one place in the Iliad only: the narrated tale of Bellerophon (Iliad vi.155–203), which introduced the trope of the "fatal letter," with its message sealed within the folded tablets that read "Kill the bearer of this." As Homer was the product of the oral tradition, the reference to written tablets was an anachronism in a narrative of an event that had transpired generations before the Trojan War, and long before the Greeks had a written language. However, the "fatal letter" story helps date the earliest possible recension of the epic to the mid-eighth century, when writing was introduced to Greece.

In his Histories Herodotus wrote:

"So these Phoenicians, including the Gephyraians, came with Kadmos and settled this land, and they transmitted much lore to the Hellenes, and in particular, taught them the alphabet which, I believe, the Hellenes did not have previously, but which was originally used by all Phoenicians. With the passage of time, both the sound and the shape of the letters changed. Because at this time it was mostly Ionians who lived around the Phoenicians, they were the ones who were first instructed in the use of the alphabet by them, and after making a few changes to the form of the letters, they put them to good use; but when they spoke of them, they called them 'Phoenician' letters, which was only right since these letters had been introduced to Hellas by Phoenicians. Furthermore, the Ionians have called papyrus scrolls 'skins,' since long ago, when papyrus was scarce, they used the skins of goats and sheep instead. In fact, even in my time many barbarians still write on such skins" (Strassler [ed] The Landmark Herodotus [2007] 5.58, 391).