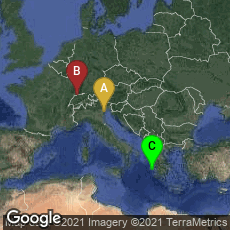 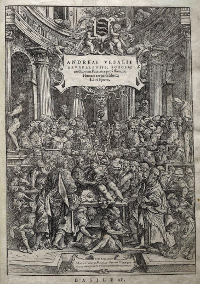 In June 1543, at the age of only 29, physician, surgeon, and anatomist Andreas Vesalius of Brussels published De humani corporis fabrica libri septem in Basel. This large and spectacularly produced volume revolutionized the science and teaching of human anatomy, and therefore of medicine in general. Throughout this encyclopedic 400,000 word book on the structure and workings of the human body Vesalius provided a fuller and more detailed description of human anatomy than any of his predecessors, correcting errors in the traditional, and enormously influential anatomical teachings of the Roman physician Galen, which had been obtained from primate rather than human dissection, and arguing that knowledge of human anatomy was to be obtained only from human sources. Even more revolutionary than his criticism of Galen and other medieval authorities was Vesalius's assertion that the dissection of cadavers must be performed by the physician himself—a direct contradiction of the medieval doctrine that dissection was a task to be performed by menials while the physician lectured from the traditional authorities. Only through actual dissection, Vesalius argued, could the physician learn human anatomy in sufficient detail to teach it accurately. This "hands-on" principle remained Vesalius's most lasting contribution to the teaching of anatomy; it is graphically represented in the Fabrica's woodcut title page (the earliest illustration of an anatomical theatre), which shows Vesalius with his right hand plunged into an opened cadaver, conducting an anatomical demonstration. Because it was then legal only to dissect the cadavers of executed criminals, and these cadavers were always in short supply, Vesalius urged physicians to take their own initiative in obtaining material for dissection. The Fabrica contains several amusing and unrepentant anecdotes of how students had robbed graves to obtain cadavers, especially those of women, since female criminals were rarely executed in those days.

The Fabrica also broke new ground in its unprecendented blending of scientific exposition, art and typography. Although earlier anatomical books, such as those by Berengario da Carpi had contained some notable anatomical illustrations, they had never appeared in such number or been executed in such minute precision as in the Fabrica, and they had usually been introduced rather haphazardly with little or no relationship to the text. In contrast, Vesalius sent his woodblocks to the printer with precise instructions as to placement within the text, and with exact marginal references which brought about direct relationship of text to illustrations, or even details within illustrations. The series of historiated initials, in which putti and dwarfed men humorously perform some of the more grisly actions associated with dissection, have been called pictorial footnotes to the text. The book remains the typographic masterpiece of Johannes Oporinus of Basel, one of the most widely learned and iconoclastic of the scholar printers. Another advantage to Vesalius of using Oporinus for this project was that Oporinus had been educated in medicine. Oporinus's success with the Fabrica apparently caused Vesalius to entrust to Oporinus all of his later publications.

The Fabrica's magnificent title page and the spectacular series of hundreds of anatomical woodcuts (full-page and smaller) spread throughout the book remain the most famous series of anatomical illustrations ever published. Though Vesalius did not credit any specific artist or artists with the images, traditionally the illustrations were attributed to an associate of Titian, the Flemish artist Jan Stephan von Calcar, who drew, and possibly engraved, the three woodcuts of skeletons in Vesalius's first series of anatomical charts, Tabulae anatomicae sex (1538). For a long time an alternative theory was that the Fabrica woodcuts were produced by an unknown artist or artists in Titian's workshop in Venice. We know that Vesalius commissioned the illustrations and supervised their production, and it is also very likely that he personally drew some of the lesser illustrations for the Fabrica, as we know that he made the drawings for the first three of the Tabulae anatomicae sex. Most of the woodblocks for the Fabrica were preserved in Munich until the bombing of Munich in World War II.

In September 2014 my wife and I attended the Vesalius Continuum conference on the Greek island of Zakynthos where Vesalius died on his return from a pilgrimage to the Holy Land. The conference was scheduled to commemorate the 500th anniversary of Vesalius's birth. At the conference the distinguished historian of art Martin Kemp presented his latest views on the origin and significance of Vesalius's images, describing the book as a visual machine interlocked with a textual machine, and attributing most of the large images to von Calcar, and some of the lesser ones, including the small diagrams, to Vesalius. The famous woodcut title page with its architectural aspects Kemp attributed on a preliminary basis to the Italian painter Giuseppe Porta, who sometimes signed his name as Giuseppe Salviati. Kemp also considered Porta a good candidate for the artist responsible for the historiated initials.

A notable feature of the Fabrica not usually considered is Vesalius's "Index of Notable Subjects and Words" published at the end of the work. Arranged alphabetically by subject, and either by first name or surname somewhat inconsistently, this index to page number and line number on a given page amounts to a detailed outline of what Vesalius considered his significant original contributions. For example, under Galen he indexed to each specific anatomical detail where he disagreed with Galen's writings.

From 1998 to 2009 I published the first English translation of De humani corporis fabrica in five volumes, the descriptions of which are available at this link.