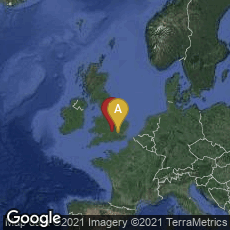 James Murray Compiles a Dictionary from 3,500,000 Quotations on Individual Slips of Paper Murray in the corrugated iron Scriptorium at Banbury Road, before 1910

In 1882 Scottish lexicographer and philologist James Murray, working in a corrugated out-building on the grounds of Mill Hill School, in Mill Hill, London called "The Scriptorium, " began the process of accumulating and organizing the data for what became known as the Oxford English Dictionary.

In the summer of 1884, Murray and his family moved to a large house on the Banbury Road in north Oxford.  There Murray had a second corrugated iron Scriptorium lined with bookshelves and 1,029 pigeon-holes for quotation slips built in the back garden— a larger building than the first, with more storage space for the ever-increasing number of slips being sent to Murray and his team. Anything addressed to ‘Mr Murray, Oxford’ would always find its way to him, and such was the volume of post sent by Murray and his team that the Post Office erected a special post box outside Murray’s house. Each day Murray received 1000 quotations from contributors to the A New English Dictionary on Historical Principles.

Murray eventually accumulated 3,500,000 quotations sent in by contributors, each on an individual slip of paper.