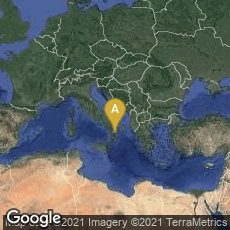 The Rossano Gospels, One of the Oldest Surviving Illuminated Manuscripts of the New Testament Among the earliest surviving evangelist portraits: Mark writing on a scroll. Rossano Gospels, circa 555. The Rossano Gospels, preserved in the Cathedral of Rossano (Calabria), Southern Italy, were written following the reconquest of the Italian peninsula from the Ostrogoths by the Byzantine Empire, after a war which began in 535 and ended decisively in 553. The codex includes the one of earliest surviving evangelist portrait, showing Mark writing on a scroll.

s"Also known as Codex purpureus Rossanensis due to the reddish (purpureus in Latin) appearance of its pages, the codex is one of the oldest surviving illuminated manuscripts of the New Testament. The now incomplete codex has the text of the Gospel of Matthew and the majority of the Gospel of Mark, with only one lucanae (Mark 16:14-20). A second volume is apparently missing. Like the Vienna Genesis and the Sinope Gospels, the Rossano Gospels are written in silver ink on purple dyed parchment. The large (300 mm by 250 mm) book has text written in a 215 mm square block with two columns of twenty lines each. There is a prefatory cycle of illustrations which are also on purple dyed parchment.

"The codex was discovered in 1879 in the Italian city Rossano by Oskar von Gebhardt and Adolf Harnack in cathedra Santa Maria Achiropita.

"The text of the Codex is generally Byzantine text-type in close relationship to the Codex Petropolitanus Purpureus. The Rossano Gospels, along with manuscripts N, O, and Φ, belong to the group of the Purple Uncials (or purple codices). Aland placed all four manuscripts of the group (the Purple Uncials) in Category V" (Wikipedia article on Rossano Gospels, accessed 01-02-2010).