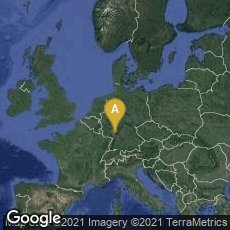 The Codex Aureus of Lorsch and its Dispersal The Codex Aureus of Lorsch,(Biblioteca Apostolica Vaticana, Pal. lat. 50, and Alba Iulia, Biblioteca Documenta Batthyaneum, s.n.), also known as the Lorsch Gospels, is one of the masterpieces of manuscript illumination produced during the period of Charlemagne's rule over the Frankish Empire.

Just prior to Lorsch's dissolution in 1563 the manuscript was taken to Heidelberg and incorporated into the Bibliotheca Palatina in Heidelberg, from which it was stolen in 1622 during the Thirty Years' War.

". . . the codex was broken in two and the covers torn off. The richly illustrated first half reached the Migazzi Library and after that was sold to Bishop Ignac Batthyani. This section is now in Alba Iulia, Romania, and belongs to Batthyaneum Library. The second half is in the Vatican Library. The front cover is held by the Victoria and Albert Museum in London, and the back cover by the Vatican Museums of Rome" (Wikipedia article on the Codex Aureus of Lorsch, accessed 11-23-2008).