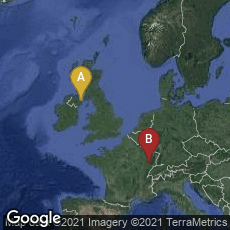 Between 585 and 590 the monk St. Columbanus from Bangor in Ireland founded an abbey on the ruins of a Gallo-Roman settlement at Luxeuil. His name was Columban in Irish, meaning "white dove;" he should not be confused with St. Columba, who founded the monastary on the island of Iona.

Columban (Columbanus) brought manuscripts from Ireland to found the abbey library at Luxeuil. Because of the treasures it held, this Celtish monastery was sacked by Vandals in 731, and after it was rebuilt it was devastated by Normans in the ninth century, and was sacked several times thereafter.

"The output of this house over the sixth to eighth centuries furnishes not only the msost advanced writing of the period but manuscripts of the highest liturgical importance. The finest of these are constructed and articulated with originality and care. They effectively illustrate the momentous change that was to end the long period during which Latin Uncial was the dominant script for such books" (Morison, Politics and Script. . . . Barker ed. [1972] 112).