Detail of page from De Architectura Libri Dece.  Please click on the image to see the full page. 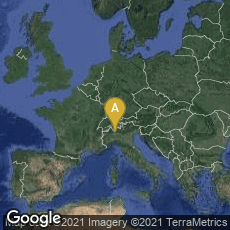 Detail of Title Page of De Architectura Libri Dece.  Please click on the image to see the full page.

Architect and architectural theorist Cesare Cesariano, humanist Benedetto Giovio and and Bono Mauro da Bergamo edited the first edition in Italian of Marcus Vitruvius Pollio's De Architectura Libri Decem, the printing of which was completed on July 15, 1521 in Como, Italy at the press of Gottardo da Ponte. This was the first translation of Vitruvius into a modern language. The translation and commentary were largely the work of Cesare Cesariano, a pupil of Donato Bramante and Leonardo da Vinci; however, the address to the reader on leaf Z8r by Gallo and Aloisio Pirovano states that Cesariano left the work unfinished, and that it was completed by Giovio and Mauro. The edition may have been 1300 copies.

"Vitruvius' technical language is fraught with difficulties. Leone Battista Alberti was of the mind that the Latins thought Vitruvius was writing Greek and the Greeks, Latin. The impenetrable Latin and the lack of illustrations gave freedom to the Renaissance designers, who were able to interpret antique architecture in their own image, all' antica. Cesariano's Vitruvius gives us a clear picture of the Renaissance perception of the architecture of Classical Antiquity. Indeed the spirit of Milan's Late Gothic Duomo can be recognized in some of Cesariano's woodcuts. Among his illustrations is an attempt at rendering Vitruvius' precepts on the ideally proportioned man, successfully rendered by Leonardo, but attempted by many 15th century theorists" (Wikipedia article on Cesare Cesariano, accessed 01-21-2009).

This edition is known for its striking illustrations: "Some subjects follow the 1511 edition, but the execution is highly original and the illustration is much more detailed than that provided by Tacuino. . . . Blocks have black backgrounds and strong black lines. Aloisio Pirovano's `Oratio' to the people of Milan on leaf [-]8r refers to the collaboration of `molti excelle[n]ti pictori.' On leaves B6r, B7r, B7v are full-page plans and elevations of Milan cathedral. Cesariano's introduction of a gothic building into a classical text, apparently the first such illustration of gothic architecture, is typical of his individual approach to Vitruvius. . . . The influence of Leonardo on these illustrations has been generally noted" (Mortimer, Harvard College Library Department of Printing and Graphic Arts, 16th Century Italian Books, no. 544).