This is a digital copy of a facsimile of the first issue of Benjamin Franklin's The General Magazine, published by the Facsimile Text Society in 1938. It was scanned by Google, but I found it through the Hathi Trust Digital Library. 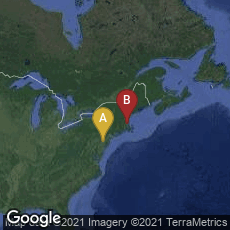 This is a digital copy of the reproduction of the first issue of The American Magazine published by the Facsimile Text Society by Columbia University Press. It was scanned by Google but, I found it through the Hathi Trust Digital Library.

The first two magazines in North America both began publication in January 1741. Benjamin Franklin was the first to conceive the idea of publishing a magazine in the American colonies. However, Andrew Bradford's American Magazine, or Monthly View of the Political State of the British Colonies, published in Boston, beat Franklin to press by three days. Franklin's publication, issued in Philadelphia, was called The General Magazine, and Historical Chronicle for all the British Plantations in America. Bradford's magazine continued publication for three months; Franklin's for six months.

Note: The online editions of both periodicals, to which I have linked above, contain detailed introductions, which provide extensive background.