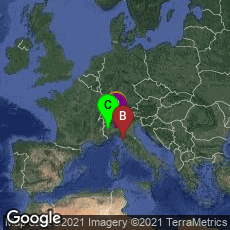 Spallanzani published his own small edition of the letters in Pavia a few days or weeks later. Also in 1794 the original letters were reprinted in Pisa in the Giornale dei literrati with the addition of  new letters on echolocation between Spallanzani and Pietro Rossi, Professor at University of Pisa.  A few months later the original letters were reprinted in Milano together with other new letters in the Opuscoli scelti sulle scienze e sulle arti.

"The problem of obstacle avoidance by bats flying in the dark is often known to European zoologists as 'Spallanzani's bat problem'. This is because the whole subject owes its place in the thoughts of scientists to the incisive thinking and masterly experimentation of Lazaro Spallanzani. . . . In 1793, when Spallanzani was sixty-four years of age, he had occasion to notice that a captive owl became quite helpless if the candle which lighted his room were blown out as it flew too close to the flame. Impressed by the complete disorientation of the owl, which crashed into the walls and other obstacles, Spallanzani repeated the observations with bats and soon realized that they were not at all inconvenienced by the darkness. This was the beginning of a long series of ingenious experiments by which within a year or two Spallanzani learned almost as much about the orientation of bats as others were able to discover in 140 years after his death. Yet only a regrettably small proportion of his observations and conclusions became widely enough known to win any general acceptance among zoologists, and even today much of his work remains unpublished" (Griffin, Listening in the Dark: The Acoustic Orientation of Bats and Men [1958] 57-58).

Gedeon, Science and Technology in Medicine, 340.