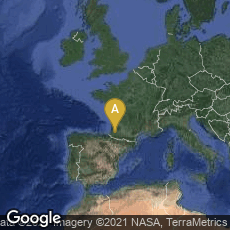 The Venus of Brassempouy, One of the Earliest Known Realistic Representations of a Human Face Frontal and profile views of the Venus of Brassempouy, Musée de l'Archéologie nationale.

The Venus of Brassempouy or La Dame de Brassempouy,  a fragmentary ivory figurine from the Upper Palaeolithic, Gravettian industry, discovered in the Grotte du Pape at Brassempouy, France in 1892, by Édouard Piette, is one of the earliest known realistic representations of a human face.

"She is 3.65 cm high, 2.2 cm deep and 1.9 cm wide. Her face is triangular and seems tranquil. While forehead, nose and brows are carved in relief, the mouth is absent. A vertical crack on the right side of the face is linked to the internal structure of the ivory. On the head is a checkerboard-like pattern formed by two series of shallow incisions at right angles to each other; it has been interpreted as a wig, a hood, or simply a representation of hair.

"Even though the head was discovered so early in the development of modern archaeology that its context could not be studied with all the attention it would have deserved, there is no doubt that the Venus of Brassempouy belonged to an Upper Palaeolithic material culture, the Gravettian (29,000–22,000 BP), more precisely the Middle Gravettian, with "Noailles" burins circa 26,000 to 24,000 BP.

"She is more or less contemporary with the other Palaeolithic Venus figurines, such as those of Lespugue, Dolní Věstonice, Willendorf, etc. Nonetheless, she is distinguished among the group by the realistic character of the representation" (Wikipedia article on Venus of Brassempouy, accessed 05-14-2009).

The Venus of Brassempouy is preserved in the Musée d'Archéologie nationale, Saint-Germain-En-Laye.

Randall White, "The women of Brassempouy: A century of research and interpretation," Journal of Archaeological Method and Theory 13.4, December 2006:251ff.