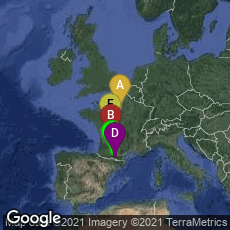 In 1864 French lawyer archaeologist and paleontologist Edouard Lartet and English banker ethnologist Henry Christy published "Cavernes du Périgord. Objets gravés et sculptés des temps pré-historiques dans l’Europe occidentale" in Revue archéologique. The previous year Lartet and Christy began systematically examining the caves in the Périgord region of France, and found incontrovertible evidence for the existence of Paleolithic mobiliary art. Their 37-page paper with two lithographed plates and numerous illustrations within the text, describing the results of those researches, was the founding work on Upper Paleolithic art, and one of the earliest publications to illustrate Paleolithic mobiliary art. It was also the only joint publication of Lartet and Christy issued before Christy’s premature death in 1865 at the age of 55.

Lartet's second and much longer paper was "Nouvelles recherches sur la coexistence de l’homme et des grands mammifères fossiles réputés caractéristiques de la dernière période géologique," Annales des sciences naturelles, 4th series, Zoologie, 15 (1861) 177–253; plates 10–13. In this paper Lartet proposed “the first chronological framework into which both human skeletal and cultural remains could be fitted, based on fossil animal bones recovered from French cave sites” (Spencer, History of Physical Anthropology [1997] 606). Cultural remains included flints and bone carvings. The first figure in plate 10 shows Lartet’s original concept of how the human skeletons in the Aurignac had been arranged in the chamber; he subsequently altered his opinion based on discoveries made in 1862. In the final plate of this paper Lartet republished from his previous paper an illustration of two deer carved on a reindeer bone which had been found between 1834 and 1845 by Pierre-Amédée Brouillet in the cave of Chauffaud in the Vienne. Brouillet and others had thought the engraving was Celtic, but Lartet declared it be much earlier; his appreciation of the significance and true date of the finds from Chaffaud, Aurignac and Massat was “the first clear statement of what we now call Franco-Cantabrian Upper Palaeolithic art.” (Daniel 1981, 62). An English translation of the first part of this paper, including a reproduction of Lartet’s reconstruction of the burial chamber, was published as "New Researches Respecting the Co-existence of Man with the Great Fossil mammals, regarded as characteristic of the latest geological period," The Natural History Review 2, no. 5 (January 1862) 53–71.