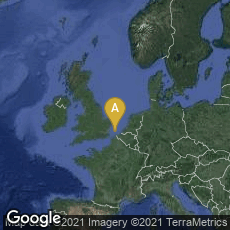 In 1807 English politician and abolitionist William Wilberforce published A Letter on the Abolition of the Slave Trade. . . , one of the pivotal works in the establishment of human rights.

As M. P. for Yorkshire, Wilberforce actively worked for the abolition of slavery since 1787. He led the effort in Parliament and was considered the voice of conscience in Britain. Even so it took twenty years for the slave trade to be abolished, and almost another twenty for slavery itself to be ended. Wilberforce’s Letter is his most comprehensive and best-argued statement of opposition. It was published on December 31, 1806 and had a marked effect: in January of 1807 a bill to abolish the slave trade was introduced in the House of Lords. On February 10, the bill was sent to the House of Commons, and passed 283 to 16 after the chief debate on February 23. The bill received royal assent at the end of March, and the slave trade was abolished.

"The hopes of the abolitionists notwithstanding, slavery did not wither with the end of the slave trade in the British Empire, nor did the living conditions of the enslaved improve. The trade continued, with few countries following suit by abolishing the trade, and with some British ships disregarding the legislation. The Royal Navy patrolled the Atlantic intercepting slave ships from other countries. Wilberforce worked with the members of the African Institution to ensure the enforcement of abolition and to promote abolitionist negotiations with other countries. In particular, the US had abolished the slave trade in 1808, and Wilberforce lobbied the American government to enforce its own prohibition more strongly" (Wikipedia article on William Wilberforce, accessed 09-21-2009).