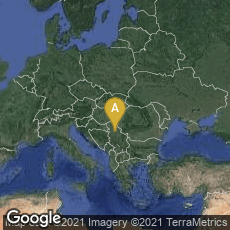 In the German bombing attack on Belgrade on April 6, 1941 4000 people were killed, and more than 8000 buildings were destroyed, including the National Library of Serbia.

"This building was built in 1832 and was the only national library attacked on purpose and destroyed in WWII. The entire fund, of 350,000 books, including invaluable medieval manuscripts, was destroyed. The library also housed collections of Ottoman manuscripts, more than 200 old printed books dating from 15th to 17th centuries, old maps, engravings, works of arts and newspapers, including all the books printed in Serbia and neighbouring countries from 1832 on. The fate of Serbia, i.e. the Kingdom of Yugoslavia, had been decided upon with a putsch and protests of 27 March 1941 against the Trilateral Pact, signed by the then government two days before. The protests infuriated Hitler, who, on the same day, decided that, besides Greece, the Kingdom of Yugoslavia should also be destroyed as a state."