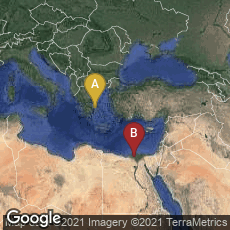 Marble head of Socrates in the Louvre. As with virtually all portrayals of figures from Greece, except possibly the renderinigs of leaders on coins, we have no way to judge whether or not this sculpture bears any true resemblance to Socrates's actual appearance.

In the Phaedrus, written circa 370 BCE, Plato recorded Socrates's discussion of the Egyptian myth of the creation of writing. In the process Socrates faulted writing for weakening the necessity and power of memory, and for allowing the pretense of understanding, rather than true understanding.

Socrates: [274c] I heard, then, that at Naucratis, in Egypt, was one of the ancient gods of that country, the one whose sacred bird is called the ibis, and the name of the god himself was Theuth. He it was who [274d] invented numbers and arithmetic and geometry and astronomy, also draughts and dice, and, most important of all, letters.

Now the king of all Egypt at that time was the god Thamus, who lived in the great city of the upper region, which the Greeks call the Egyptian Thebes, and they call the god himself Ammon. To him came Theuth to show his inventions, saying that they ought to be imparted to the other Egyptians. But Thamus asked what use there was in each, and as Theuth enumerated their uses, expressed praise or blame, according as he approved [274e] or disapproved.

"The story goes that Thamus said many things to Theuth in praise or blame of the various arts, which it would take too long to repeat; but when they came to the letters, [274e] “This invention, O king,” said Theuth, “will make the Egyptians wiser and will improve their memories; for it is an elixir of memory and wisdom that I have discovered.” But Thamus replied, “Most ingenious Theuth, one man has the ability to beget arts, but the ability to judge of their usefulness or harmfulness to their users belongs to another; [275a] and now you, who are the father of letters, have been led by your affection to ascribe to them a power the opposite of that which they really possess.

"For this invention will produce forgetfulness in the minds of those who learn to use it, because they will not practice their memory. Their trust in writing, produced by external characters which are no part of themselves, will discourage the use of their own memory within them. You have invented an elixir not of memory, but of reminding; and you offer your pupils the appearance of wisdom, not true wisdom, for they will read many things without instruction and will therefore seem [275b] to know many things, when they are for the most part ignorant and hard to get along with, since they are not wise, but only appear wise."