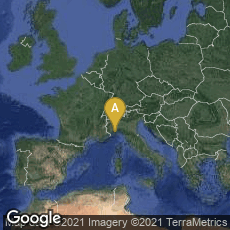 In 1503 Domenico Nani Mirabelli (Dominic Nannius Mirabellius, Domenicus Nannus) issued Polyanthea opus suavissimis floribus exornatum . . .  from Savona, Italy at the press of Francesco Silva. This encyclopedic work of roughly 680 pages was one of the first general reference works produced for the printed book market. It was also one of the most popular reference works printed in the sixteenth century.

Nani Mirabelli, rector of schools and archpriest of the cathedral in Savona, also served as papal secretary. The Polyanthea contained selections from the writings of over 150 authors from Aristotle to Dante, arranged in alphabetical order and covering subjects in the fields of classical antiquity, medieval history, natural history and medicine. In the preface to the work Nani Mirabelli

"boasted that he had selected the best of literature, appropriate for the moral edification of young and old and of both sexes, and desired it to 'be useful to as many people as possible'. Nani devoted his ode to the reader to praising the censorship value of his selections—which 'plucked gold from amid filthy squalor'—perhaps precisely because he had cast his net more widely than his predecessors and feared criticism for doing so. He listed 163 authors excerpted and acknowledged that some of these had mocked the Holy Scriptures and taken positions contrary to the Catholic truth. But thanks to his careful selection, Nani promised safe passage through the shoals of pagan literature—both the raciness of Ovid or Horace and the obscurity of Aristotle—for the moral edification of Christians; he included quotations from a few recent authors like Dante and Petrarch. This theme of religious edification and safety was underscored by the engravings present in the first two editions. The title page of the first edition featured the author seated at an altar reaching for a basket of flowers around which were clustered religious and other worthy figures; the image helped elucidate a Greek title that Nani also explained in his preface lest readers not understand it as synonym for florilegium.

"At the same time as he played up the religious themes, Nani identified his principal audience as young people studying rhetoric. For them especially, Nani was proud to offer definitions and descriptions; Latin translations of all Greek expressions; sentences of philosophers, historians, and poets in Latin and Greek; and a tabular outline of the larger topics. The early Polyanthea served in part as a dictionary of hard words, offering in addition to the major articles, many very short ones, with just a definition, a Greek etymology, and one or even no quotation as an example" (Ann M. Blair, Too Much to Know: Managing Scholarly Information before the Modern Age [2010] 177-178; see also 179-85).

The Polyanthea went through at least 41 editions between 1503 and 1681, nearly all of which were revised and expanded by their successive editors. Blair estimated the length of the first edition at 430,000 words, and estimated the 1619-20 Lyon edition at no less than 2.5 million words. Like other popular reference works of the early modern period, copies tended to suffer hard usage, and relatively few copies of the first edition survived. Blair was able to locate 20 copies of the first edition cited in online library catalogues, most of which were in Italy. In January 2013 OCLC recorded 10 copies, only three of which (Newberry Library, Harvard and U. Chicago) were in the United States.

Collinson, Encyclopedias: Their History Throughout the Ages (1964), 76-77. University of Chicago, Encyclopedism from Pliny to Borges, no. 17.