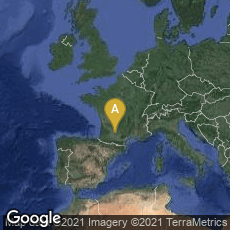 In 1866 the Swimming Reindeer was found in two pieces by a French engineer, Peccadeu de l'Isle,  at a rock sheltter at Monastruc near Bruniquel,  in the Midi-Pyrénées region of southern France. It was carved from the tip of a mammoth tusk. In the early 20th century the Abbé Henri Breuil realized that the two pieces fit together to form a single sculpture of two reindeer swimming nose to tail.

"The sculpture shows a female reindeer closely followed by a larger male reindeer. The larger male is indicated by his size, antlers and genitals, whilst the female has her teats modelled. The reindeer are thought to be swimming in illustration of the migration of deer that would have taken place each autumn. It is known that it would be autumn as both reindeer are shown with antlers, and only during autumn do both male and female reindeer have antlers. At this time of year reindeer would be much easier to hunt, and the meat, skin and antlers would be at their best. Each of the reindeer has been marked with a burin to show different colouring and texture in the deer's coat. Oddly there are ten deeper cuts on each side of the back of the leading female reindeer. These may have been intended to indicate coloured markings, but their purpose is unclear. Further studies of Ice Age artifacts gives the hypothesis that the marks may have been made to keep track of how many animals, in this case reindeer, the owner of the carving killed during the hunt. It is thought that women would gather the animals in a rushed group setting. Cleaning and preparing it could not only be hectic but lead to quarrels about who gets what and how much. It could also mean that the owner made it through their 10th season of hunting during the migration, or any other counting related tracking system" (Wikipedia article on Swimming Reindeer, accessed 01-22-2013).

The Swimming Reindeer is preserved in the British Museum.