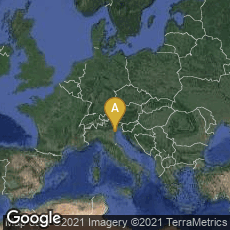 Paganino & Alessandro Paganini Issue the First Printed Edition of the Qur'an in Arabic, of Which One Copy Survived The only known copy of the first printed edition of the Qur'an in Arabic preserved in the library of the Franciscan Friears of isola di San Michele in Venice.

Between August 9, 1537 and August 9, 1538 Venetian printers Paganino and Alessandro Paganini produced the first printed edition of the Qur'an (Koran) in Arabic. The edition was probably intended for export to the Ottoman Empire. For centuries this entire edition was thought to be lost, and the rumor was that the Pope had the complete print run burned.

Possibly the most daring and pioneering enterprise in sixteenth-century Venetian printing, this edition was mentioned by a handful of contemporary witnesses, and was reported as wholly destroyed as early as 1620. The reasons suggested for its destruction ranged from its suppression by the Pope ("Pontifex Romanus exemplaria ad unum omnia impressa suppressit") to the ridiculous (divine intervention would prevent its printing), but without any copies to study, and without any reference in a bibliography or library catalogue, the mysterious edition was regarded as a ghost.

In 1987 professor Angela Nuovo found a single copy in the library of the Franciscan Friars of Isola di San Michele, in Venice. The copy contains a note of ownership of Teseo Ambrogio degli Albonesi, who died soon after 1540, and the stamp of Arcangelo Mancasula, Vicar of the Holy Office (Holy Inquisition) of Cremona, applied a few years later. Albonesi, an orientalist from Pavia, is the only person known to have handled the first printed edition of the Qu'ran in Arabic, and he referred to it in his Introductio in Chaldaicam linguam, Syriacam atque Armenicam (Pavia, 1539). Nuovo, "A Lost Arabic Koran Rediscovered," The Library (1990) Sixth Series XII, No. 4, 273-292.

Later study of the single copy by experts in Arabic showed that the edition contains a remarkably large number of errors, which would have made it totally unacceptable to Muslims:

"The other factor that makes the Koran printed by Paganini intolerable is the huge number of errors. We have seen that a single imprecision could cost the scribe his head, yet here we have a volume with scarcely a single page printed correctly. 'There is not a word without errors,' Elsheikh emphasizes, 'the disctinction between the similar forms of the Arbaic language is completely ignored. The compositor does not recognize the letters of the alphabet.' A compositor who must have copied the words from an unknown original, which must necessarily have been error-free.

"Angela Nuovo points ou that the elevated technical investment [to create an Arabic type font] was not matched by a careful checking of the text, and she reports the opinions of some Arabists, that the text is riddled with errors typically made by Jews who speak Arabic. The Paganinis. therefore, evidently looked for compositors and proofreaders among the flourishing world of Hebrew publishing at the time rather than in the long-established Muslim community in Venice. Elsheik does not agree.' That hypothesis just doesn't hold up. In Venice there were all the Arabs you could want. The city is full of beautiful mansucript versions of the Koran. And so?  The 1538 Koran doesn't only contain errors that we might call orthographical (for example, a letter that should be written with three dots is written with two),— there are errors that amount to outright blasphemy, such as the omission of the name of God. 'Certainly, there was a lack of copyists and writers,' Angela Nuovo declares, 'unlike what happened for the Greeks close to Aldus Manutius; in this case they had to make do with what they had" (Magno, Bound in Venice. The Serene Republic and the Dawn of the Book [2013] 99-100).