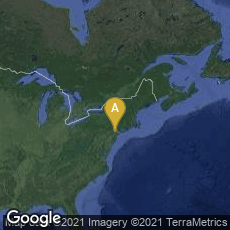 In 1965 A. Michael Noll, American electrical engineer and pioneer computer artist at Bell Labs in Murray Hill, New Jersey, created Computer Composition With Lines. He generated the art work algorithmically with pseudo-random processes to mimic Piet Mondrian’s Composition With Lines (1917). In what became a classic experiment in aesthetics, copies of both works were shown to people, a majority of whom expressed a preference for the computer work and thought it was by Mondrian. The work won first prize in August 1965 in the contest held by Computers and Automation magazine.

The following year Noll published an illustrated account of the production of this pioneering work of computer art and its perception: "Human or Machine: A Subjective Comparison of Piet Mondrian's 'Composition with Lines' (1917) and a Computer-Generated Picture," The Psychological Record 16 (1966) 1-10.

In January 2014 Noll published an authoritative, illustrated, and thoroughly documented historical paper on computer art done at Bell Labs from 1962 to 1968 entitled "First-Hand: Early Digital Art at Bell Telephone Laboratories, Inc." on the website of the IEEE Global History Network.