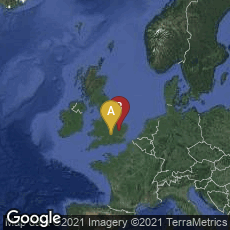 On June 8, 1705 English astronomer mathematician, geophysicist, meteorologist and physicist Edmond Halley issued a pamphlet of three leaves from Oxford entitled Astronomicae cometicae synopsis. The pamphlet descibed his method for computing the motion of comets and establishing their periodicity. Halley based his cometary researches upon Newton's Principia, in which Newton, applying his theory of gravitation, had established the cometary orbit as a type of conic, but Newton favored a parabolic orbit while Halley chose to consider in detail the possibility of an elliptical one. He collected and analyzed all available cometary observations from the fourteenth to the seventeenth centuries, and from these computed and tabulated the orbits of twenty-four comets seen between the years 1337 and 1698. Three of these orbits, belonging to the bright comets of 1531, 1607 and 1682, were so similar that Halley assigned them to the same comet, whose orbit he described as an elongated ellipse traversed in approximately seventy-five years, allowing for perturbations by the planet Jupiter. He predicted that the comet would reappear in December 1758, and it was indeed sighted on Christmas Day of that year, confirming his hypothesis of elliptical cometary orbits and providing strong independent confirmation of Newton's rules of gravitation.  The sighting, which occurred fifteen years after Halley's death, excited the entire Western scientific world, and the object was named "Halley's comet" in his honor.

The first edition of the Astronomiae cometicae synopsis was caused to be printed by Arthur Charlett, Master of University College, Oxford. A letter from Halley to Charlett, dated June 23, 1705 (Bodleian Ms. Ballard 24, fo. 27) contains Halley's thanks to Charlett "for your kind endeavours to give reputation and value to my small performance about Comets," and his request for "a few more of my papers for most of the ten you were pleased to send me, were soiled so as not to be fit to be presented to Quality" (printed in full in MacPike, Correspondence and papers of Edmond Halley, p. 125). Later the same year the work was translated into English as A Synopsis of the Astronomy of Comets. . . . from the Original printed at Oxford, by John Senex in London.

Newton's "Principia Mathematica" and the History of its Original Publication