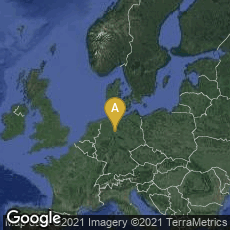 "The publication of the Explication was prompted by Leibniz's correspondence with Joachim Bouvet, a member of the Jesuit Mission in China. Leibniz had developed an interest in China, and in April 1697 he edited a collection of letters and essays by members of the Mission, entitled Novissima Sinica. A copy of this came into the hands of Bouvet, who wrote to Leibniz on 18 October 1697 expressing his commendation of the work. Thus began an extended correspondence between the two men which proved to be very important for the dissemination of Leibniz's ideas about binary arithmetic. The crucial exchange began on 15 February 1701, when Leibniz wrote to Bouvet describing for his correspondent the principles of his binary arithmetic, including the analogy of the formation of all the numbers from 0 and 1 with the creation of the world by God out of nothing. Bouvet immediately recognised the relationship between the hexagrams of the I ching and the binary numbers and he communicated his discovery in a letter written in Peking on 4 November 1701. This reached Leibniz, after a detour through England, on 1 April 1703. With this letter, Bouvet enclosed a woodcut of the arrangement of the hexagrams attributed to Fu-Hsi, the mythical founder of Chinese culture, which holds the key to the identification. Within a week of receiving Bouvet's letter, Leibniz had sent to Abbé Bignon for publication in the Mémoires of the Paris Academy his Explication de l'Arithmétique binaire,... & sue ce qu'elle donne le sens des anciens figures Chinoises de Fohy. Ten days later he sent a brief account to Hans Sloane, the Secretary of the Royal Society. Leibniz viewed binary arithmetic less as a computational tool than as a means of discovering mathematical, philosophical and even theological truths. He remarked to Tschirnhaus in 1682 that he anticipated from the use of binary numbers discoveries in number theory that other progressions could not reveal. It was at the same time a candidate for the characteristica generalis, his long sought-for alphabet of human thought. With base 2 numeration Leibniz witnessed a confluence of several intellectual strands in his world view, including theological and mystical ideas of order, harmony and creation. Fontanelle, secretary of the Paris Academy, wrote the unsigned review of Liebniz's paper for the Mémoires section of the volume. He noted that arithmetic could have different bases besides ten; bases such as 12, and two as in the case of Leibniz's binary system. He also noted that although the binary system was not practical for common use Leibniz thought that it would be of advantage in advanced mathematics" (W.P. Watson, antiquarian book description, accessed from ilabdatabase.com on 01-21-2010).

This manuscript was first published in 1966 to commemorate the 250th anniversary of Leibniz's death as Herrn von Leibniz' Rechnung mit Null und Eins. That book included facsimiles of Leibniz's "Explication de l'arithmétique binaire" (1705), his two letters to Johann Christian Schulenberg on binary arithmetic (March 29 and May 17, 1698), published in the Opera Omnia of 1768, and historical articles and German translations.