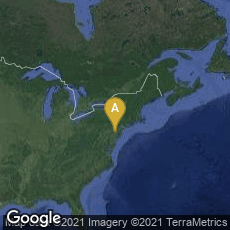 In 1687 papermaker William Rittenhouse followed other Quaker and Mennonite families emigrating to the newly formed neighborhood of Germantown, Pennsylvania (founded in 1683). William partnered with Philadelphia’s first printer, purchased a 20-acre plot of land along Paper Mill Run, (a tributary of the Wissahickon Creek) and, with the help of his son Nicholas, in 1690 built the first paper mill in British North America. For the next 40 years, the Rittenhouse family were the only papermakers in America. The location was then known as Rittenhousetown. Rittenhouse family paper was most widely used to produce the German language bibles that were in high demand among the growing Mennonite population—very fitting as William Rittenhouse was the first Mennonite bishop for the Germantown congregation.

The Rittenhouse paper mill operated until the 1850s.