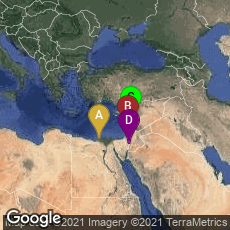 Pamphilus Establishes a Library and Scriptorium, and is Executed During the Diocletianic Persecution of Christians Pamphilius of Caesarea. From the Menologion of Basil II, written in Constantinople c. 975-1025. Vatican Library. Between 275 and his martyrdom in 309 Pamphilus of Caesarea (Pamphilius), presbyter, and teacher of Eusebius, devoted his life to searching out and obtaining copies of manuscript texts, some of which he copied himself. He established a library that may have contained 30,000 manuscripts, and a scriptorium at a Christian theological school at Caesarea Palaestina, now Caesarea Maritima, a town on the coast of Israel between Tel Aviv and Haifa. Because of this library Caesarea was the capital of Christian scholarship in the 3rd century.

"This Pamphilus was of a noble family in the Phoenician city of Berytus [Beirut], where he received his early education. Probably in the early and mid-280's, he studied in Alexandria under the presbyter Pierius, who was himself known as 'the Younger Origen.' From there Pamphilius seems to have come to Caesarea, where his great learning in philosophy and theology enabled him to open a successful school at Caesarea. Pamphilus' school could boast no unbroken descent from Origen's school, because there was no continuous sucession of masters at Caesarea between Origen and Pamphilus. . . ." (Carriker, The Library of Eusebius of Caesarea [2003] 12-13).

During the Diocletianic persecution, the last and most bloody persecution of Christians before Constantine established Christianity as the Roman state religion, Pamphilus was arrested and imprisoned in November 307. He was executed and martyred on February 16, 309.

"By the end of 307 Pamphilius was arrested under the orders of Urbanus, the local Roman governor, tortured cruelly, and placed in prison. Yet, in prison and suffering from his torture wounds, Pamphilius did not remain idle but continued editing the Septuagint and with Eusebius, wrote a Defense of Origen that he sent to the confessors in the mines of Phaeno, Egypt [i.e. South Palestine, "in a mining area lying east of the Wadi Arabah, between the south end of the Dead Sea and Petra."]

"After being in prison for two years, Pamphilius was ordered killed by the new governor, Firminius. He was then beheaded on February 16, 309 with several of his disciples. In his memory Eusebius called himself Eusebius Pamphili, to denote his close friendship with Pamphilius" (Orthodox Wiki article on Pamphilius, accessed 02-02-2013).

Celtic Monks Illuminate the Book of Kells
Ratdolt's Edition of Eusebius's "Chronicon" Contains One of the Earliest Acknowledgments of Gutenberg's Invention
The Codex Sinaiticus
The Emperor Constantine Converts to Christianity Beginning with the Battle of the Milvian Bridge
Codex Vercellensis, the Earliest Surviving Manuscript of the Old Latin Gospels
The Codex Beneventanus, From the Libraries of Richard Mead and Anthony Askew
Eusebius Establishes the Eusebian Sections, One of the Earliest, Most Widely-Used Cross-Indexing Systems
Contantine Orders Fifty Luxurious Bibles for the Churches of Constantinople
Nicolas Jensen's Will: the First Concrete Evidence of the Existence of Matrices for the Casting of Type Fonts

The Diocletianic Persecution of Christians Extends for Eight Years