From the first illustrated version.

From the first illustrated version. 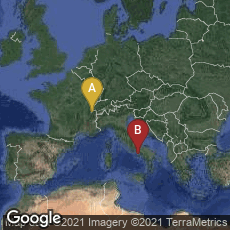 First page of of the first, unillustrated edition of De viribus herbarum carmen. (Click on the image to view the full page.)

On May 9, 1477 printer Arnaldus de Bruxella in Naples issued the first printed edition of the hexameter poem, De viribus herbarum carmen attributed to Macer Floridus (or Aemilius Macer), a pseudonym of Odo of Meung (Odo de Meung, Odo Magdunensis), who lived in the Loire area of France towards the end of the eleventh century.

Macer's unillustrated text described the medicinal properties of 77 herbs and was written in Latin hexameter, a poetic verse form that was most likely employed as a mnemonic device for physicians, apothecaries and others.

"The text titled De Viribus Herbarum (On properties of plants) has been traditionally attributed to Odo de Meung (Odo Magdunensis), who is believed to have lived during the first half of the 11th century and was from Meung on the Loire. Recent research has shown, however, that the De Viribus Herbarum was probably written in an earlier version, perhaps during the tenth century in Germany. The text was further expanded, including new data from the translation of Arabic texts into Latin in Salerno from the end of the 11th century onward. If this is the case, this text is good evidence of the continuity of scientific activity in the Middle Ages: its most ancient parts come from a period when there was a revival of interest in botany and a recovery of the classical tradition, while the most recent additions integrate the contribution of the Arabic world" (http://huntbot.andrew.cmu.edu/HIBD/Exhibitions/OrderFromChaos/OFC-Pages/01Pre-Linnaean%20botany/birth.shtml, accessed 06-13-2009).

ISTC no. im00001000. In November 2014 a digital facsimile of the unillustrated first edition was available from the Bayerisches Staatsbibliothek at this link.

The first edition of this work illustrated with woodcuts appears to be a Geneva edition printed circa 1500: ISTC No.: im00005000.