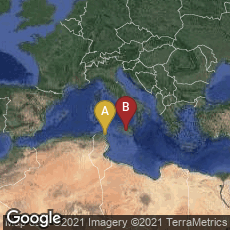 Polybius Recorded the Invention of the Hydraulic Telegraph The relief stele of Kleitor supposedely depicting the Achaean statesman and historian Polybius, 2nd century BC, Hellenistic Greek artwork from the Peloponnese. Dimensions are as follows: height of the stele, 2.18 m (7.2 ft); width of the stele, 1.11 m (3.6 ft); height of the carved figure of Polybios, 1.96 m (6.4 ft).

According to Polybius, a Greek historian of the Hellenistic period, Aeneas Tacticus, one of the earliest Greek writers on the art of war, invented the hydraulic telegraph about 350 BCE. It was a semaphore system used during the First Punic War to send messages between Sicily and Carthage.

"The system involved identical containers on separate hills; each container would be filled with water, and a vertical rod floated within. The rods were inscribed with various predetermined codes.

"To send a message, the sending operator would use a torch to signal the receiving operator; once the two were synchronized, they would simultaneously open the spigots at the bottom of their containers. Water would drain out until the water level reached the desired code, at which point the sender would lower his torch, and the operators would simultaneously close their spigots."