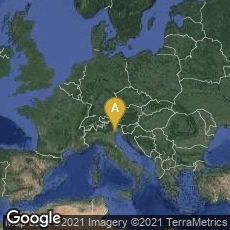 The Earliest Depiction of Eyeglasses in a Painted Work of Art Portrait of Hugh of Saint-Cher, 1352, Tommaso da Modena in the Chapter House of the Seminario attached to the in Treviso, north of Venice.

"The earliest depiction of spectacles [eyeglasses] in a painted work of art occurs in a series of frescoes dated 1352 by Tommaso da Modena in the Chapter House of the Seminario attached to the Basilica San Nicolo in Treviso, north of Venice. Cardinal Hugo of Provence [Hugh de St. Cher] is shown at his writing desk wearing a pair of rivet spectacles that appear to stay in place on the nose without additional support. The Cardinal actually died in the 1260s and could never have worn spectacles! Across the room Cardinal Nicholas of Rouen is depicted using a monocular lens in the style of later quizzing glasses. The artist has even tried to represent the physical effort of straining to see the book through the lens. The men depicted in this series of paintings are Dominicans (like Fra Rivalto), members of a dynamic monastic order founded in 1217 and regarded as 'the carrier of the sciences'. It is notable that visual aids are portrayed as devices for the use of literate men as well as aesthetes - they had, after all, commissioned this important work of early Renaissance art" (London College of Optometrists web page on the Invention of Spectacles, accessed 06-22-2009).