The Long Room of the Old Library at Trinity College Dublin. 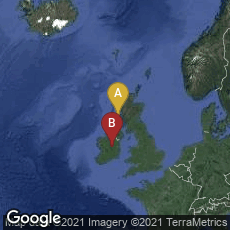 The Book of Durrow, One of the Earliest Surviving Fully Decorated Insular Gospel Books The beginning of the Gospel of Mark from the Book of Durrow. The Book of Durrow, which derives its name from the Irish Columban monastery of Durrow, County Offaly, is an early medieval Gospel book decorated with carpet pages and framed symbols of the Evangelists. It was long considered the earliest surviving fully decorated insular Gospel book, and thought to date from the mid-seventh century, yet it was executed with such a degree of sophistication that recent scholars argue for a date more contemporaraneous with the Book of Kells. Thus, its date is uncertain and controversial.

"A date falling between the Durham Gospel fragment (no. 5) and the Lindisfarne Gospels (no. 9) in the middle of the second half of the 7th century seems most probable, and, though in the past the book has been dated both earlier and later, this dating seems now to be generally accepted by both art historians and paleographers. The later provenance and the colophon give some reasons for thinking that the book was produced in a Columban monastery, and are used as supporting evidence by those who consider the manuscript to have been written in Ireland or Iona (Henry, Nordenfalk). Textual and paleographical evidence is adduced by those who, favouring an origin in Northumbria (Lowe, Bruce-Mitford, Brown), also tend to a slightly later date c. 680." (Alexander, Insular Manuscripts 6th to the 9th Century [1978] No. 6, p. 30).

The Book of Durrow is preserved in Trinity College Library, Dublin.