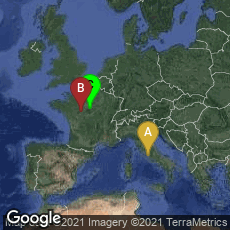 The Ashburnham Pentateuch, Narrative Images Between the Late Antique and the Carolingian Renaissance The Ashburnham Pentateuch (sometimes called the Tours Pentateuch),(Paris, Bibliothèque Nationale de France, MS nouv. acq. lat. 2334), a late sixth century or early 7th century illuminated manuscript of the Pentateuch, is the only western illuminated manuscript with narrative rather than purely decorative or iconic images that bridges the period between late antique and the Carolingian renaissance. It has been described by some scholars as Spanish, but probably came from Italy. One theory of its origin is that it was produced in the imperial scriptorium of Rome on commission from Galla Placidia to educate her son Emperor Valentinian III in the Christian doctrine.

Though the manuscript originally contained all five books of the Pentateuch, it now lacks the whole of Deuteronomy as well as sections of the other five books. In Early Medieval Bible Illumination and the Ashburnham Pentateuch (2004) Dorothy Verkerk argued that the manuscript was written in Rome in the early seventh century, whence it traveled north to Fleury,

"where it was refurbished and given a decorated initial in the eighth century. From Fleury it was taken to Tours where a ninth-century addition was inserted and where it was studied, amended, copied, and emulated in manuscripts and frescoes. The manuscript was deposited at some point in the library of St. Gatien, and was moved to the Bibliothèque Municipale [at Tours] during the French Revolution, from where it was stolen, brought to England, and then finally returned to France in the nineteenth century" (Verbeek 58-59).

"It has 142 folios and 19 miniatures, and measures 372mm by 321mm. It is thought to have originally included as many as 68 full page miniatures. A full page table containing the Latin names of the books and Latin transliterations of the Hebrew names serves as a front piece to Genesis. The table is enclosed within a curtained arch. Some of the full page miniatures, such as that containing the miniature of Noah's Ark (folio 9r), contain a single scene. Other of the full page miniatures, such as that telling the story of Cain and Abel, contain many scenes which are placed in a register, with each scene having a different color background" (Wikipedia article on the Ashburnham Pentateuch, accessed 11-26-2008).

♦ The manuscript was at Tours when it was stolen in 1842 by mathematician, historian of science, palaeographer, and book thief, Guglielmo Libri, and sold by Libri in 1847, along with many other stolen manuscripts, to Bertram, 4th Earl of Ashburnham. In 1888 after a long and well-publicized dispute with the curator of manuscripts at the Bibliothèque nationale de France, Léopold Delisle, the fifth Earl of Ashburnham sold the manuscript, along with other ancient French codices his father had purchased from Libri, to the Bibliothèque nationale de France, where it is preserved today.

For a detailed account of Guglielmo Libri's role in the history of the Ashburnham Pentateuch see my book, Scientist, Scholar and Scoundrel (2013).

A digital facsimile is available from BnF Gallica at this link.