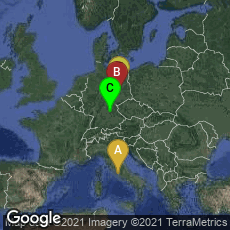 Image Source: en.wikipedia.org
The original Nuremberg printing of Luther's Ninety-Five Theses. "Martin Luther’s Disputatio pro declaratione virtutis indulgentiarum of 1517, commonly known as the Ninety-Five Theses, is considered the central document of the Protestant Reformation. Its complete title reads in translation: “Out of love and zeal for clarifying the truth, these items written below will be debated at Wittenberg. Reverend Father Martin Luther, Master of Arts and of Sacred Theology and an official professor at Wittenberg, will speak in their defense. He asks this in the matter: That those who are unable to be present to debate with us in speech should, though absent from the scene, treat the matter by correspondence. In the Name of Our Lord Jesus Christ. Amen.” Berlin State Library In response to the sale of indulgences in 1516 and 1517 by Johann Tetzel, a Dominican friar and papal commissioner for indulgences, sent to Germany by the Roman Catholic Church to raise money to rebuild St Peter's Basilica in Rome, Martin Luther wrote to Albrecht, Archbishop of Mainz and Magdeburg, protesting the sale of indulgences. He enclosed in his letter a copy of his "Disputation of Martin Luther on the Power and Efficacy of Indulgences." This later became known as The 95 Theses.

According to Philipp Melanchthon, writing in 1546, Luther nailed a copy of the 95 Theses to the door of the Castle Church in Wittenberg on October—an event now seen as sparking the Protestant Reformation.  Church doors were the bulletin boards of Luther's time.

Some scholars have questioned the accuracy of Melanchthon's account, noting that no contemporaneous evidence exists for it. Others have countered that no such evidence is necessary, because this was the customary way of advertising an event on a university campus in Luther's day.

Two broadside editions of the 95 theses exist--one printed in Nuremberg, the other in Leipzig. There was also a 7-page quarto edition, of which a copy is preserved at Harvard College Library. No broadside appears to have been issued from Wittenberg, which suggests that the copy Luther posted on the Castle Church door was probably a manuscript. (Luther 1483-1983. An Exhibition at the Houghton Library, with a List of sixteenth-Century Luther Editions at Harvard [1983]).

"The 95 Theses were quickly translated from Latin into German, printed, and widely copied, making the controversy one of the first in history to be aided by the printing press." (Wikipedia article on Martin Luther, accessed 12-09-2008).

"The Castle Church in Wittenberg, Germany, in the Holy Roman Empire, where the Ninety-five Theses famously appeared, held one of Europe's largest collections of religious artifacts, or holy relics. These had been piously collected by Frederick III of Saxony. At that time pious veneration, or viewing, of relics was purported to allow the viewer to receive relief from temporal punishment for sins in purgatory. By 1509 Frederick had over 5,000 relics, purportedly 'including vials of the milk of the Virgin Mary, straw from the manger [of Jesus], and the body of one of the innocents massacred by King Herod.'

"The relics were kept in reliquaries and exhibited once a year for the faithful to venerate. "In 1509, each devout visitor who donated toward the preservation of the Castle Church received an indulgence of one hundred days per relic." This would allow the person relief of 100 days in purgatory, and thus hasten their entry into heaven. By 1520 Frederick had increased his collection to over 19,000 relics, allowing pilgrims viewing all of them to receive an indulgence that would reduce their time in purgatory by 5,209 years" (Wikipedia article  on The 95 Theses, accessed 12-09-2008).