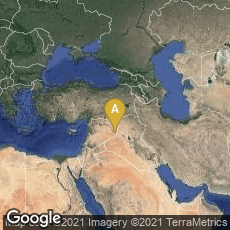 The Dura Europos synagogue, discovered in eastern Syria in 1932, was dated from an Aramaic inscription to 244. It is unique in that it was preserved virtually intact. It was preserved, ironically, when it had to be infilled with earth to strengthen the city's fortifications against a Sassanian assault in 256. The synagogue contains a forecourt and house of assembly with frescoed walls depicting people and animals, and a Torah shrine in the western wall facing Jerusalem. The synagogue paintings, the earliest continuous surviving biblical narrative cycle, are conserved at Damascus. They are the only set of surviving wall paintings other than floor mosaics.

"The painted scenes of stories include Moses receiving the Law, Moses leading the Hebrews out of Egypt, and many others. It is thought that the Synagogue was used in part as an instructional display to educate and teach the history and laws of the religion. Some think that this synagogue was painted in order to compete with the many other religions practiced in Dura Europos. The large-scale pictorial art in the synagogue helps to dispel narrow interpretations of historically prohibited visual images" (Wikipedia article on Dura-Europos synagogue, accessed 12-10-2008).

A parchment fragment discovered in the Dura Europos synagogue containing texts highly reminiscent of rabbinic prayer texts, may be the earliest surviving record of rabbinic texts. Reference: Goldstein & Mintz, Printing the Talmud from Bomberg to Schottenstein [2006] no. 1, p. 170.