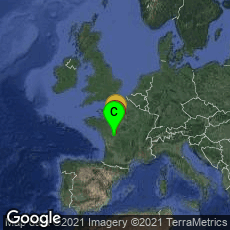 Charles Martel Stops Muslim Expansion at the Battle of Tours At the Battle of Tours (also called the Battle of Poitiers), fought in 732 in an area between the cities of Poitiers and Tours, in north-central France, near the village of Moussais-la-Bataille (Vouneuil-sur-Vienne), about 20 km northeast of Poitiers, the Frankish king Charles Martel ("Charles the Hammer") decisively stopped the Muslim army's advance into Northern Europe.

"The Battle of Tours earned Charles the cognomen "Martel" ('Hammer'), for the merciless way he hammered his enemies. Many historians, including the great military historian Sir Edward Creasy, believe that had he failed at Tours, Islam would probably have overrun Gaul, and perhaps the remainder of western Christian Europe. Gibbon made clear his belief that the Umayyad armies would have conquered from Rome to the Rhine, and even England, having the English Channel for protection, with ease, had Martel not prevailed. Creasy said "the great victory won by Charles Martel ... gave a decisive check to the career of Arab conquest in Western Europe, rescued Christendom from Islam, [and] preserved the relics of ancient and the germs of modern civilization." Gibbon's belief that the fate of Christianity hinged on this battle is echoed by other historians including John B. Bury, and was very popular for most of modern historiography. It fell somewhat out of style in the twentieth century, when historians such as Bernard Lewis contended that Arabs had little intention of occupying northern France. More recently, however, many historians have tended once again to view the Battle of Tours as a very significant event in the history of Europe and Christianity. Equally, many, such as William Watson, still believe this battle was one of macrohistorical world-changing importance, if they do not go so far as Gibbon does rhetorically" (Wikipedia article on Battle of Tours, accessed 12-14-2008).