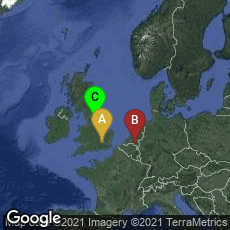 From 1984 to 1986 Acorn Computers Ltd, Philips, Logica and the BBC (with some funding from the European Commission's ESPRIT program) marked the 900th anniversary of the original Domesday Book—an 11th century census of England—with the multimedia BBC Domesday Project. This publication is frequently cited as an example of digital obsolescence.

The Project "included a new 'survey' of the United Kingdom, in which people, mostly school children, wrote about geography, history or social issues in their local area or just about their daily lives. This was linked with maps, and many colour photos, statistical data, video and 'virtual walks'. Over 1 million people participated in the project. The project also incorporated professionally-prepared video footage, virtual reality tours of major landmarks and other prepared datasets such as the 1981 census.

"The project was stored on adapted laserdiscs in the LaserVision Read Only Memory (LV-ROM) format, which contained not only analog video and still pictures, but also digital data, with 300 MB of storage space on each side of the disc. The discs were mastered, produced, and tested by Philips at their Eindhoven headquarters factory. Viewing the discs required an Acorn BBC Master expanded with an SCSI controller and an additional coprocessor controlled a Philips VP415 "Domesday Player", a specially-produced laserdisc player. The user interface consisted of the BBC Master's keyboard and a trackball (known at the time as a trackerball). The software for the project was written in BCPL (a precursor to C), to make cross platform porting easier, although BCPL never attained the popularity that its early promise suggested it might.

In 2002, there were great fears that the discs would become unreadable as computers capable of reading the format had become rare (and drives capable of accessing the discs even more rare). Aside from the difficulty of emulating the original code, a major issue was that the still images had been stored on the laserdisc as single-frame analogue video, which were overlaid by the computer system's graphical interface. The project had begun years before JPEG image compression and before truecolour computer video cards had become widely available.

"However, the BBC later announced that the CAMiLEON project (a partnership between the University of Leeds and University of Michigan) had developed a system capable of accessing the discs using emulation techniques. CAMiLEON copied the video footage from one of the extant Domesday laserdiscs. Another team, working for the UK National Archives (who hold the original Domesday Book) tracked down the original 1-inch videotape masters of the project. These were digitised and archived to Digital Betacam.

"A version of one of the discs was created that runs on a Windows PC. This version was reverse-engineered from an original Domesday Community disc and incorporates images from the videotape masters. It was initially available only via a terminal at the National Archives headquarters in Kew, Surrey but has been available since July 2004 on the web.

The Domesday Book, Recording the First English Census
Foundation of England's Public Record Office
Sir Henry James Publishes a Facsimile of the Part of the "Domesday Book" Relating to Cornwall: the first Photozincographic Facsimile of a Manuscript