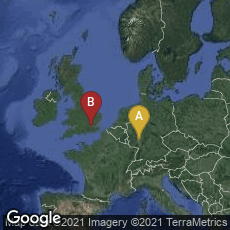 Bartholomaeus Anglicus (c. 1496) from the Bridwell Library, Perkins School of Theology, SMU. This edition is illustrated with woodcuts introducing each of the 19 books. The woodcut for Book Nine, relates to the properties of time: the months, and the ecclesiastical calendar. It shows the twelve months and the labors associated with them, proceeding counter-clockwise from January (just to the right of the bottom roundel). Personifications of the warm (female) and cold (male) seasons are at the center of the image.

About 1496 English printer Wynkyn de Worde, successor to William Caxton, printed at Westminister an edition of the encyclopedic work by Bartholomaeus Anglicus,  De proprietatibus rerum, in the English translation by John Trevisa, illustrated with woodcuts mostly derived from the numerous earlier editions. This work was the first book printed in England on paper made at the first English paper mill, operated by John Tate from around 1495 till his death in 1507.

Remarkably, the original unillustrated manuscript, substantially marked up by the compositors, for a portion of this work, is preserved in the Plimpton Collection at Columbia University Library. Plimpton

"purchased it from Quaritch who had bought it when Lord Middleton's library was sold at auction in 1925. The large and beautiful codex was made for Sir Thomas Chaworth of Wiverton, Notts., about 1440; it apparently soon became the property of the Willoughby family, neighbors and kin of the Chaworths, in whose possession it remained until the sale of Lord Middleton's books in 1925. (Thomas Willoughby was created Baron Middleton 1 January 1711/12). Throughout the nearly 500 years in which the MS. was in private hands it was all but unknown to scholars" (Three Lions cited below, 18).

Wynkyn de Worde's printed text deviates substantially from the manuscript. A second manuscript source, no longer extant, was also a source for the edition.

"Worde is generally credited for moving English printing away from its late-Medieval beginnings and toward a modern model of functioning. Caxton had depended on noble patrons to sustain his enterprise; while de Worde enjoyed the support of patrons too (principally Margaret Beaufort, mother of King Henry VII), he shifted his emphasis to the creation of relatively inexpensive books for a commercial audience and the beginnings of a mass market. Where Caxton had used paper imported from the Low Countries, de Worde exploited the product of John Tate, the first English papermaker. De Worde published more than 400 books in over 800 editions (though some are extant only in single copies and many others are extremely rare). His greatest success, in terms of volume, was the Latin grammar of Robert Whittington, which he issued in 155 editions. Religious works dominated his output, in keeping with the tenor of the time; but de Worde also printed volumes ranging from romantic novels to poetry (he published the work of John Skelton and Stephen Hawes), and from children's books to volumes on household practice and animal husbandry. He innovated in the use of illustrations: while only about 20 of Caxton's editions contained woodcuts, 500 of de Worde's editions were illustrated.

"He moved his firm from Caxton's location in Westminster to London; he was the first printer to set up a site on Fleet Street (1500), which for centuries became synonymous with printing. He was also the first man to build a book stall in St. Paul's Churchyard, which soon became a center of the book trade in London.

"De Worde was the first to use italic type (1528) and Hebrew and Arabic characters (1524) in English books; and his 1495 version of Polychronicon by Ranulf Higdon was the first English work to use movable type to print music" (Wikipedia article on Wynkyn de Worde, accessed 01-10-2008).