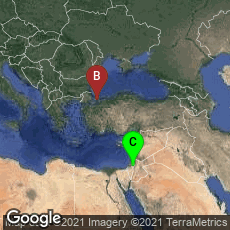 Uspenski Gospels. Beginning of the Gospel of Mark (1: 1-6). National Library of Russia. The earliest surviving dated example of a manuscript written in Greek minuscule is the Uspensky Gospels. The codex was probably written in Constantinople by monk named Nicholas between 815 and 835. Later it belonged to the monastery of Great Lavra of St. Sabas, known in Arabic as Mar Saba (Hebrew: מנזר מר סבא‎), a Greek Orthodox monastery overlooking the Kidron Valley in the West Bank east of Bethlehem in Palestine. In 1844 bp Porphiryj Uspienski took it along with other manuscripts, including a portion of the Codex Coislinianus, to Russia. The Uspensky Gospels is preserved in the National Library of Russia in Saint Petersburg (Gr. 219. 213. 101).

"As the script of this book is by no means immature or primitive, the adoption of this style should probably be dated at least half a century earlier. The place of its origin is not known for certain, but there are some grounds for thinking that it was popularized by members of the important Stoudios monastery in the capital [Constantinople], which was a well-known centre of book production at a later date. Gradually the uncial hand was abandoned, and by the end of the tenth century it was no longer used except for a few special liturgical books. The new script facilitated the copying of texts by making more economical use of parchment . . . .

"The transliteration of old uncial books into the new script was energetically undertaken by the scholars of the ninth century. It is largely owing to their activity that Greek literature can still be read, for the text of almost all authors depends ultimately on one or more books written in minuscule script at this date or shortly after, from which all later copies are derived; the quantity of literature that is available to us from the papyri and the uncial manuscripts is only a small proportion of the whole. In the process of transliteration mistakes were sometimes made, especially by misreading letters that were similar in the uncial script and therefore easily confused. At many points in Greek texts there are errors common to all the extant manuscripts which appear to be derived from the same source, and this source is usually taken to be a ninth-century copy. A further assumption generally made is that one minuscule copy was made from one uncial copy. The uncial book was then discarded, and the minuscule book became the source of all further copies. The theory has a certain a priori justification on two grounds, since the task of transliteration from a script that was becoming less and less familiar would not be willingly undertaken more often than was absolutely necessary, and there is at least some likelihod that after the destruction of the previous centuries many texts survived in one copy only. But these arguments do not amount to proof, and there are cases which can only be explained by more complicated hypotheses" (Reynolds & Wilson, Scribes and Scholars 3rd ed ([1991] 59-60).