Image Source: books.google.com
Portrait of Vesalius from his China Root Epistle. This was the same portrait he used in De humani corporis fabrica (1543) Image Source: books.google.com
First page of Vesalius's dedication to Joachim Roelants. In the humorous historiate initial the putti are hoisting an animal up for the purposes of dissection, using the capital T. 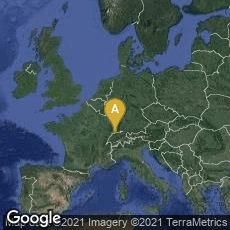 Andreas Vesalius published Rationem modumq[ue] propinandi radicis Chynae decocti. . . . in Basel at the press of Johannes Oporinus. In this work on the discovery and therapeutic use of the china root (Smilax chinae) in the treatment of syphilis, Vesalius described the first attempt to formulate methods of identification of an exotic drug. He also offered physicians means of detecting adulteration of the china root, which was coming into common use.

Vesalius devoted most of the China-Root Epistle to a defense of his anatomical methods and doctrines as described in the Fabrica (1543). The work also contains important autobiographical data, including Vesalius's remarks about his teaching experiences at Pisa, his destruction of some of his early manuscripts (a disgusted reaction to the Fabrica's reception), and information concerning his medical forebears.