Plate 4 of Albinus, Tabulae Anatomicae (1747). The rhinoceros in the background tends to make the dissected figure stand out in the image. 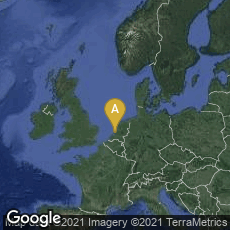 In 1747 Dutch physician and anatomist Bernhard Siegfried Albinus published Tabulae sceleti et musculorum corporis humani in Leiden at the printing office of Johan & Hermann Verbeek. The plates in this large folio work are unsurpassed for their cool, elegant aesthetic and scientific accuracy. They were drawn and engraved by Jan Wandelaar, a pupil of the engravers Jacob Fokema and Guillem van der Gouwen, and the painter Gérard de Lairesse, who prepared the drawings for Govert Bidloo's atlas (referenced in this database). Prior to working for Albinus, Wandelaar worked for anatomist Friedrik Ruysch. Albinus, however, provided Wandelaar with the opportunity for the full expression of his talents as a draftsman and engraver. For many years Wandelaar worked nearly exclusively for Albinus, and lived in Albinus' house, illustrating the long series of superb books which Albinus produced. Choulant states that when Wandelaar died Albinus fell into a severe depression, from which he only gradually recovered. The Tables of the Skeleton and Muscles of the Human Body represents the apogee of an exceptional collaboration between physician and artist which lasted from 1721 until the artist's death in 1754, and resulted in a series of unsurpassed publications.

Roberts and Tomlinson described the innovative method that Wandelaar and Albinus devised for the transfer of the most accurate and proportional images of the anatomy to the drawings, using two nets, or grids, of small cords. The first plates are finished representations of the skeleton and are each accompanied by an outline-plate of the same size. The following 9 plates represent complete finished musclemen, each with an additional outline plate. The 14 plates following these represent special muscles and parts of muscles. Each of the very numerous figures on these last 14 plates is supplied with an outline-drawing unless the letters are engraved directly upon the finished figures. There are a total of 40 plates.

The 3 finished plates of the skeleton and the 9 finished muscle men are some of the most beautiful plates in the history of engraving. Wandelaer placed each figure in a carefully chosen landscape setting, and the artistic results are so pleasantly successful that the anatomical figures, although composed of many separate parts, appear to be actually stepping out of the picture.