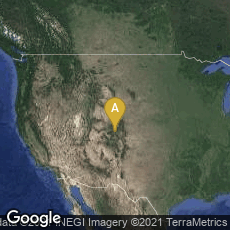 "The facades of buildings were texture-mapped onto 3D models. The same 3D model was used to translate 2D screen coordinates into a database of buildings in order to provide hyperlinks to additional data" (Wikipedia)

The term hypermedia is used as a logical extension of the term hypertext in which graphics, audio, video, plain text and hyperlinks intertwine to create a medium of information that is generally unlinear. Funded by ARPA, The Aspen Movie Map  was an early hypermedia project produced in 1978-79 by the Architecture Machine Group (ARC MAC) at MIT under the direction of Andrew Lippman. It allowed the user to take a virtual tour through the city of Aspen, Colorado.

"ARPA funding during the late 1970s was subject to the military application requirements of the notorious Mansfield Amendment introduced by Mike Mansfield (which had severely limited funding for hypertext researchers like Douglas Engelbart).

"The Aspen Movie Map's military application was to solve the problem of quickly familiarizing soldiers with new territory. The Department of Defense had been deeply impressed by the success of Operation Entebbe in 1976, where the Israeli commandos had quickly built a crude replica of the airport and practiced in it before attacking the real thing. DOD hoped that the Movie Map would show the way to a future where computers could instantly create a three-dimensional simulation of a hostile environment at much lower cost and in less time (see virtual reality).

"While the Movie Map has been referred to as an early example of interactive video, it is perhaps more accurate to describe it as a pioneering example of interactive computing. Video, audio, still images, and metadata were retrieved from a database and assembled on the fly by the computer (an Interdata minicomputer running the MagicSix operating system) redirecting its actions based upon user input; video was the principle, but not sole affordance of the interaction" (Wikipedia article on Aspen Movie Map, accessed 04-16-2009).