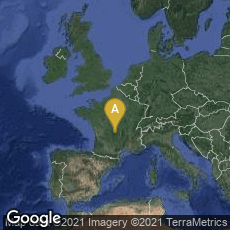 The Cinématographe Lumière in projection mode.

Credit for inventing the cinématographe, a film camera which also serves as a film projector and developer, is widely disputed. "Some argue that the device was first invented and patented as "Cinématographe Léon Bouly" by French inventor Léon Bouly in February 12, 1892. It is said that, due to a lack of fee, Bouly was not able to pay the rent for his patent the following year, and Auguste and Louis Lumière's engineers bought the license.

"Popular thought, however, dictates that Louis Lumière was the first to conceptualise the idea, and both Lumière brothers shared the patent. They made their first film, Sortie de l'usine Lumière de Lyon, in 1894" (Wikipedia article on Cinematograph, accessed 04-22-2009).

"The date of the recording of their first film is in dispute. In an interview with Georges Sadoul given in 1948, Louis Lumière tells that he shot the film in August 1894. This is questioned by historians (Sadoul, Pinel, Chardère) who consider that a functional Lumière camera didn't exist before the end of 1894, and that their first film was recorded March 19th 1895, and then publicly projected March 22nd at the Société d'encouragement pour l'industrie nationale in Paris" (Wikipedia article on Auguste and Louis Lumiere, accessed 04-22-2009).