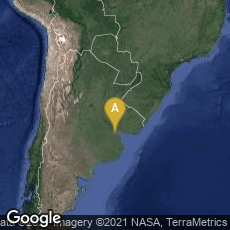 In 1939 Argentine writer and librarian Jorge Luis Borges in Buenos Aires published an essay entitled La bibliotheca total (The Total Library), describing his fantasy of an all-encompassing archive or universal library.
In Borges' work this universal library was created, remarkably, by an abstract device that produced a random sequence of letters and symbols, ad infinitum. In his essay Borges

"traced the infinite-monkey concept back to Aristotle's Metaphysics. Explaining the views of Leucippus, who held that the world arose through the random combination of atoms, Aristotle notes that the atoms themselves are homogeneous and their possible arrangements only differ in shape, position and ordering. In De Generatione et corruptione (On Generation and Corruption), the Greek philosopher compares this to the way that a tragedy and a comedy consist of the same "atoms", i.e., alphabetic characters. Three centuries later, Cicero's De natura deorum (On the Nature of the Gods) argued against the atomist worldview:

" 'He who believes this may as well believe that if a great quantity of the one-and-twenty letters, composed either of gold or any other matter, were thrown upon the ground, they would fall into such order as legibly to form the Annals of Ennius. I doubt whether fortune could make a single verse of them.'

"Borges follows the history of this argument through Blaise Pascal and Jonathan Swift, then observes that in his own time, the vocabulary had changed. By 1939, the idiom was 'that a half-dozen monkeys provided with typewriters would, in a few eternities, produce all the books in the British Museum.' (To which Borges adds, 'Strictly speaking, one immortal monkey would suffice.') Borges then imagines the contents of the Total Library which this enterprise would produce if carried to its fullest extreme:

" 'Everything would be in its blind volumes. Everything: the detailed history of the future, Aeschylus' The Egyptians, the exact number of times that the waters of the Ganges have reflected the flight of a falcon, the secret and true nature of Rome, the encyclopedia Novalis would have constructed, my dreams and half-dreams at dawn on August 14, 1934, the proof of Pierre Fermat's theorem, the unwritten chapters of Edwin Drood, those same chapters translated into the language spoken by the Garamantes, the paradoxes Berkeley invented concerning Time but didn't publish, Urizen's books of iron, the premature epiphanies of Stephen Dedalus, which would be meaningless before a cycle of a thousand years, the Gnostic Gospel of Basilides, the song the sirens sang, the complete catalog of the Library, the proof of the inaccuracy of that catalog. Everything: but for every sensible line or accurate fact there would be millions of meaningless cacophonies, verbal farragoes, and babblings. Everything: but all the generations of mankind could pass before the dizzying shelves—shelves that obliterate the day and on which chaos lies—ever reward them with a tolerable page' " (Wikipedia article on Infinite Monkey Theorem, accessed 05-25-2009).