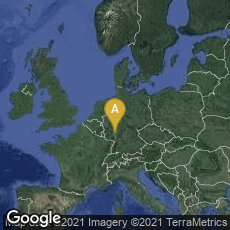 The Sibyllenbuch Fragment, the Earliest Surviving Remnant of Any European Book Printed by Movable Type

The Sibyllenbuch fragment, also known as Fragment vom Weltgericht, a small portion of a leaf from an early printed medieval poem containing prophecies of the fate of the Holy Roman Empire, may be the earliest surviving remnant of any European book printed by movable type. It was printed in Mainz using an early state of the DK font later used in the 36-line Bible. This state of the type was assigned by George D. Painter to the press of Johannes Gutenberg prior to his partnership with Johann Fust.

The Incunabula Short Title Catalogue (ISTC no. is00492500) dates the Sibyllenbuch fragment to "about 1452-53," making it older than any other European document printed by movable type.

"The Sibyllenbuch fragment consists of a partial paper leaf printed in German using Gothic letter. It is owned by the Gutenberg Museum in Mainz, Germany. The fragment was discovered in 1892 in an old bookbinding in Mainz. The text on the fragment relates to the Last Judgment and therefore sometimes is also called “Das Weltgericht” (German for "Last Judgment"). The text is part of a fourteenth century poem of 1040 lines known as the 'Sibyllenbuch' (Book of the Sibyls) . . . . The British Library identifies the fragment as coming from a quarto volume, which is a book composed of sheets of paper on which four pages were printed on each side, which were then folded twice to form groups of four leaves or eight pages. From analysis of the location of the watermark on the fragment and the known length of the entire poem, it has been estimated that the complete work contained 37 leaves (74 pages) with 28 lines per page.

"The type face used in the Sibyllenbuch is the same as that used in other early fragments attributed to Gutenberg, an Ars minor by Donatus (a Latin grammar used for centuries in schools) and several leaves of a pamphlet called the Turkish Calendar for 1455 (likely printed in late 1454), and has been called the DK type after its use in the Donatus and Kalendar. Scholars have identified several different states of this type face, a later version of which was used in about 1459-60 to print the so-called 36-line Bible. For this reason, the various states of this type have collectively been called the '36-line Bible type.'

"Due to the 'less finished state of the [DK] font', scholars have concluded it was 'plausibly earlier than 1454', the approximate date of the publication of Gutenberg’s Bible. Although at one time some believed it dated to the 1440s, it is now believed to have been printed in the early 1450s. George D. Painter concluded that 'primitive imperfection' in the type face of the Sibyllenbuch indicated it was the earliest of the fragments printed in the DK type" (Wikipedia article on Sibyllenbuch fragment, accessed 07-10-2009).

Book History from 1452 to 1797
Printing by Handpress or by Hand
Bibliography
Survival of Information / Philology
Typography: Letter & Type Design
Typography: Typesetting by Hand