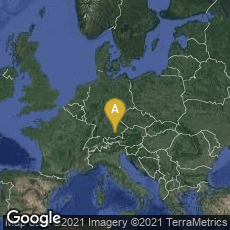 In 2009 Bettina Wagner and the Bayerische Staatsbibliothek München, published in print Als die Lettern laufen lernten. Medienwandel im 15. Jahrhundert (When Letters Learned to Move. The Transition of Media in the 15th Century):

"The invention of printing with movable letters by Johann Gutenberg is frequently described as a „media revolution“ and compared to the effects of the „electronic revolution“ of the past decades. While both events had far-reaching consequences on the production and distribution of texts, the exhibition intends to demonstrate that a gradual transition rather than a sudden turnover took place in the second half of the 15th century. Increasingly, printing techniques were employed for the production of books, but the oldest printed books, traditionally referred to as incunabula, still show many individual features which were created by hand. Thus, innovation and tradition overlap in many respects: the modern techniques for multiplication of texts and images in print only gradually superseded handwriting, and for a long time, printed books continued to be corrected by hand and to be decorated with coloured headlines and painted illustrations.

"About 90 items are displayed from the rich holdings of incunabula in the Bayerische Staatsbibliothek, which ranks first among all libraries world-wide with holdings of more than 20,000 15th-century books. The most famous incunabula are on show in the „Schatzkammer“ (treasury), including the Gutenberg-Bible and the ‚Türkenkalender’ of 1454, the earliest printed book in German, which survives in a single copy held at the Bayerische Staatsbibliothek. In addition to illustrated manuscripts and blockbooks, incunabula with painted miniatures and outstanding examples of 15th-century woodcuts can be seen, among them the report by the Mainz canon Bernhard von Breydenbach about his journey to Palestine, Hartmann Schedel’s personal copy of his ‚Nuremberg Chronicle’ and Sebastian Brant’s ‚Ship of Fools’, for which Albrecht Dürer may have designed illustrations. Apart from woodcuts, examples of other techniques for printing illustrations are presented, like copper engravings, metal cuts and printing with colour and gold – still at an experimental stage in the 15th century.

"In the second part of the exhibition, a range of very diverse incunabula give insight into the production and distribution of printed books – starting with the manuscript copy text used for typesetting and ending with the book arriving in the hands of a buyer and reader. Proof-sheets and printed tables of rubrics reveal how early printers organized the production of books. In the first decades of printing, modern conventions of book design like title-pages developed. Texts printed in non-Latin alphabets and unusual formats as well as evidence for 15th-century print-runs demonstrate the effectiveness and capability of early printing workshops. The new medium of the broadside reached entirely new groups of readers. In the printing press, posters and handbills could be produced in large numbers and thus served to disseminate all manners of texts – from pious songs over medical advice up to current news. Early printers also used broadsides to advertise their products in order to achieve financial success. This, however, led to a rapid decrease in book prices: The exhibition ends with a note added to an incunable in 1494 by a buyer who marvels at the low cost of the book. Forty years after Gutenberg published his Bible, the technology of printing finally prevailed over older, competing forms of text reproduction. While conservative circles continued to plead for copying texts by hand, the printed book’s triumph proved unstoppable, even though some readers, like Sebastian Brant’s ‚foolish reader’ could not cope with the massive number of books available" (https://www.bsb-muenchen.de/Detailed-information.403+M56017d4e158.0.html, accessed 09-18-2009).