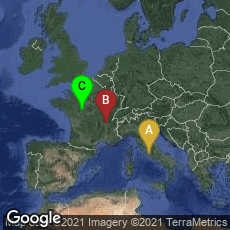 "The end of classical civilization in the West—roughly between AD 450 and 650, with regard to transmission of texts—is not so much the story of a violent physical destruction of the Roman empire as was once thought, but rather a matter of the barbarization of Roman civilization over 200 years or so, as the army, the government officials, the business classes, and the very population assumed the styles and customs first of the Ostrogoths and then of the Lombards. In the course of time, the forum, the bath and the temple fell into disuse and decay, their traditional roles in civic life forgotten as the public city-state was replaced by the private tribal kingdom. As Roman civilization faded, the Roman education of public school and private tutor slowly diminished; the body of literature that was the common property of the educated in Antiquity ceased to have an audience, and as the market for books disappeared the public stationers vanished. In Gaul, centurions like Martin (c.316-97) became saints, senators like Sidonius (c. 423-80) became bishops, and some patricians disenchanted with society, like Benedict (c. 480-550), removed themselves and formed communities with their fellows that lived according to a rule. Order and stability, once the obligation of the state, became the Church's responsibility. Literacy, necessary both to the teaching of a religion dependent on Scripture and to the function of the Church as administrative heir to the Roman state, became the near monopoly of the Church, which acted in effect as the civil service of the tribal kingdoms for the next 500 years" (R. Rouse, "The Transmission of the Texts," Jenkyns (ed) The Legacy of Rome: A New Appraisal (1992) 43).