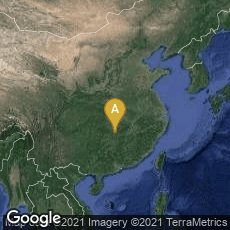 The Mawangdui Silk Texts (Chinese: 馬王堆帛書; pinyin: Mǎwángduī Bóshū), texts of Chinese philosophical and medical works written on silk, were found buried in Tomb no. 3 at Mawangdui, in the city of Changsha, Hunan, China in 1973.

"They include the earliest attested manuscripts of existing texts such as the I Ching, two copies of the Tao Te Ching, one similar copy of Strategies of the Warring States and a similar school of works of Gan De and Shi Shen. Scholars arranged them into silk books of 28 kinds. Together they count to about 120,000 words covering military strategy, mathematics, cartography and the six classical arts of ritual, music, archery, horsemanship, writing and arithmetic" (Wikipedia article on Mawangdui Silk Texts, accessed 01-31-2010).

Most of the Mawangdui Silk Texts are preserved in the Hunan Provincial Museum.