The beginning of Pliny's text from the Sweynheim and Pannartz edition, Venice, 1470. 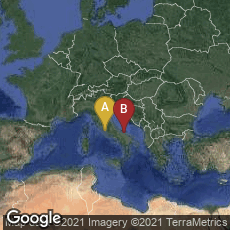 In 1471 Italian humanist and grammarian Niccolò Perotti, Archibishop of Siponto, incensed by the number of errors in Giovanni Andrea Bussi's edition of Pliny's Historia naturalis issued in Rome by Conrad Sweynheym and Arnold Pannartz, wrote to the Pope asking him to set up a board of learned correctors, such as himself, who would scrutinize, every text before it could be printed. Perotti's self-serving effort has been described as the first call for press censorship.

"The power of the press to impose a measure of uniformity was felt from the beginning to be doubled-edged. The hasty correction which a hard-pressed editor such as Giovanni Andrea Bussi was obliged to carry out, very often on the first manuscript that came to hand, permitted corrupt texts to be put into wide circulation. Even worse, an already corrupt text could become the vehicle of willful emendation on the part of the editor. It was precisely this that provoked another papal curialist, Niccolò Perotti, Archbishop of Spiponto, to attack Bussi's editing as early as 1471 and to call for centralized overseeing of texts issued at Rome. He says that he had thought the advent of printing was an inestimable boon to mankind until he set eyes on Bussi's 1470 edition of Pliny and realized the men of slight learning were now in a position to publish whatever they liked in hundreds of copies, without any sort of editorial responsibility or control. He proposes as a remedy that the pope should appoint a competent scholar (he thinks of himself) to supervise texts printed at Rome.

"Perotti himself, when Bussi ceased working for Sweynheym and Pannartz to be come the papal librarian, got the chance to turn his hand to preparing editions for the same firm in 1473: his own work found no kindlier reception with a number of fellow humanists than Bussi's had with him. His utopian scheme for control of the press came to nothing, but it did point to a troublesome aspect of the new invention" (Davies, "Humanism in Script and Print," Kraye (ed) The Cambridge Companion to Renaissance Humanism [1996] 57).

ISTC no. ip00787000 for the Sweynheym and Pannartz 1470 edition of Pliny. In November 2013 a digital facsimile of that edition was available from the Bayerische Staatsbibliothek at this link.

Book History from 1452 to 1797
Publishing
Censorship