Gutenberg in a 16th-century copper engraving. 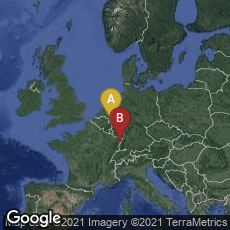 Image Source: www.gutenberg.de
An imaginative oil painting done in 1871 by Friedrich Reichert depicting Gutenberg as associates looking at the result of some his earliest printing. Gutenberg Museum Mainz.

In Strasbourg, Johannes Gutenberg, a goldsmith, working with partners, produced small cast metal mirrors for the "great Aachen pilgrimage." As many as 100,000 of these mirrors were cast from a mixture of lead, tin and antimony—the three basic ingredients that Gutenberg later used in the casting of metal type. The Aachen pilgrimage of 1439-40 was postponed because of an outbreak of plague.

Much of what is known about Gutenberg comes from the collection of 28 legal documents from a court case that mention him by name. These records were transcribed verbatim before the originals were destroyed in a fire in Strasbourg in 1870. The documents were first published in Festschrift zum fünfhundertjährigen geburtstage von Johann Gutenberg, im auftrage der stadt Mainz, 1900. A revision and amplification of two of the texts was published in Gutenbergfestschrift zur feier des 25jährigen bestehens des Gutenbergmuseums in Mainz, 1925. The documents were translated into English in McMurtrie, The Gutenberg Documents. With translations of the texts into English, based with authority on the compilation by Dr. Karl Schorbach (1941).

From these legal documents American printer and historian of printing Theodore Low De Vinne concluded that Gutenberg's key discovery was the invention of the type mold.

"De Vinne's unique contribution to the history of printing was his analysis of what was meant by the 'invention of printing,' printing the Western sense. He concluded that the European invention of printing consisted not in the use of the press long employed for broadsides and indulgences or in the use of moveable type already in occasional use by the Koreans and Chinese, but in the development of the type mold, which permitted the large-scale production of uniform type. He came to this conclusion by examining transcripts of documents from a 1439 court case iin Strasbourg. The testimony at this trial discussed secrets known only to Gutenberg and his partner, Andrew Dritzehen. After Dritzehen's death, Gutenberg asked individuals to go to the work site and disassemble 'the four pieces' so that others would not perceive its function. De Vinne blieved that the object Gutenberg was protecting—consisting of four parts but forming one object—was a type mold. Therfore, as inventor of the type mold, Gutenberg deserved the distinction of being the inventor of printing, no matter who else had previously worked using other techniques. De Vinne's conclusion gradually gained acceptance, although it was two decades before European scholars embraced it" (Tichenor & Koenig, The Dean of American Printers. Theodore Low de Vinne and the Art Preservative of All Arts [2014] 71).

Printing by Handpress or by Hand
Technology / Engineering