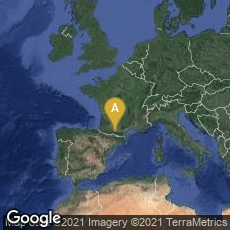 Henri Breuil's sketch of how "The Sorcerer" would have looked. 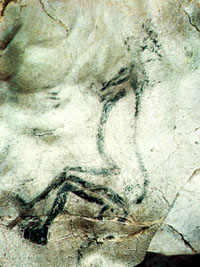 The Sorcerer, an enigmatic therianthrope cave drawing, is thought to have been created about 12000 BCE. It was discovered in the cavern known as "The Sanctuary" in the Trois-Frères cave in Montesquieu-Avantès, Ariège, France. The cave was discovered by the three sons of comte Henri Bégouën in 1912-1914. Exploration of the cave was interrupted by World War I, resuming in 1918. Count Bégouën and Henri Breuil published the image of "The Sorcerer" for the first time in 1920: H. Bégouën and H. Breuil, "Un dessin relevé dans la grotte des Trois Frères à Montesquieu-Avantès (Ariège)," C. r. Ac. Inscr. (1920) p. 45, 303.

The image, which Breuil made famous, has been variously interpreted as some kind of great spirit or master of animals, or a shaman performing a ritual to ensure good hunting. Whatever its original meaning to prehistoric people, it is generally agreed that this was a cult object of great significance to the people who used the cave.

The cave contained so many images, many of them intricately intertwined, that their study took decades. In Four Hundred Centuries of Cave Art, Transl. Mary E. Boyle (1952) Breuil indicated that Max Bégouën first saw and photographed the image. Breuil wrote:

"First of all, the 'God' first called the 'Sorcerer' by Count Bégouën and I, the only figure painted in black of all those engravings in the Sanctuary, four metres above the floor in an apparently inaccessible position, only to be reached by a secret corridor climbing upwards in a spiral. Evidently, he presides over all the animals, collected there in incredible numbers and often in a terribly tangled mass. He is 75 cms high and 50 cms wide, he is entirely engraved but the painting is unequally distributed; on the head there are only a few traces, on the eyes, nose, forehead and the right ear. This head is full face with round eyes with pupils, between the eyes runs a line for the nose, ending in a little arch. The pricked ears are those of a Stag. From a blacked painted band across the forehead rise two big thick antlers with no frontal tines but with a single short tine, fairly high above the base of each branch, bending left. This figure has no mouth, but a very long beard cut in lines and falling on the chest. The fore-arms, which are raised and joined horizontally, end in two hands close together, the short fingers outstretched; they are colourless and almost invisible. A wide black band outlines the whole body, growing narrower at the lumbar region, and spread out round the legs which are bent. A spot marks the left knee-joint. The feet and big toes are rather carefully made and show a movement similar to steps in a 'Cakewalk' dance. The male sex, emphasized but not erect, pointing backwards but well developed, is inserted under the bushy tail of a Wolf or Horse, with a little tuft at the end. Such is the Magdalenian figure considered to be the most important in the cavern and the Spirit controlling the multiplication of game and hunting expeditions" (Breuil, op. cit., 176).

It may be impossible to put ourselves in the mindset of prehistoric man without projecting our worldview. One way is to study the rituals of present stone-age peoples such as Aborigines (Indigenous Australians), who also create rock paintings. A more recent study, devoid of Breuil's religious bias, that reviews prior or alternative theories and suggests that cave images were derived from trance and magic in shamamistic ritual is the beautifully illustrated book by Jean Clottes and David Lewis-Williams, The Shamans of Prehistory. Trance and Magic in the Painted Caves. Text by Jean Clottes, translated from the French by Sophie Hawkes (1996).