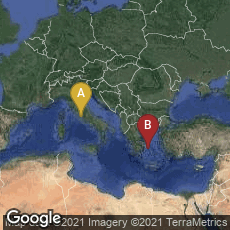 Rhetorica ad Herennium, a treatise on rhetoric, persuasion, and mnemonics, was composed about 90 BCE. This treatise, of which over 100 medieval manuscripts survive, was formerly attributed to the Roman philosopher, statesman, lawyer, orator Cicero. Its authorship is now considered unknown.

During the Middle Ages Rhetorica ad Herennium was the most influential treatise on mnemonics. The techniques it expounded, known as the method of loci, or memory palace, were attributed to the Greek poet Simonides of Ceos (Kea). The Rhetorica is the only comprehensive discussion of Simonides' techniques that survived from the ancient world through the Middle Ages.

"The techniques described in this book were widely practiced in the ancient and medieval worlds. Memory training was considered a centerpiece of classical education in the language arts, on par with grammar, logic and rhetoric. Students were taught not just what to remember but how to remember it. In a world with few books, memory was sacrosanct" (http://www.nytimes.com/interactive/2011/02/20/magazine/mind-secrets.html, accessed 02-20-2011).

The section on mnemonics appears in Book III, pp. 205-213 of the Loeb Library edition.

Twelve printed editions of Rhetorica ad Herennium appeared between 1479 and 1500. The first was published in Venice by Filippo di Pietro. ISTC No. ic00646000. A digital facsimile of that edition is available from the Bayerische Staatsbibliothek at this link.