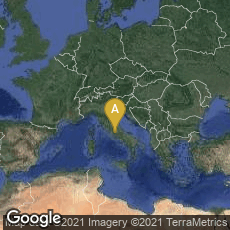 The first page of a manuscript of De oratore by Cicero, written and illuminated in Northern Italy in the 15th century, and preserved in the British Library

Sometimes considered the first book printed in Italy, an edition of Cicero’s De oratore, was issued from the press of the German printers Conrad Sweynheym and Arnold Pannartz at the monastery of Subiaco in 1465. The date of September 30, 1465 was inferred for the edition by scholars because, as the Incunabula Short Title Catalogue reports, "The Leipzig copy, now in Moscow, contains annotations dated 30 Sept. 1465" (ISTC no. ic00654000).

More reliably the Lactantius Opera, also printed at Subiaco, which bears the issue date of October 29, 1465, should be considered the first full book printed in Italy. This was also one of the first books printed in Roman type, and one of the first three printed editions of a classical text. The edition size has been estimated between 100 and 275 copies. 18 copies remain extant.

"The introduction of printing in Italy (Subiaco-Rome) was almost certainly arranged by highly placed persons in the entourage of Pope Paul II. This and other similar beginnings, especially common in Italy, i.e. the establishment of presses by invitation rather than upon printers' initiative, are nevertheless a sign that the importance of printing had been recognized" (Hirsch, Printing, Selling and Reading 1450-1550 [1967] 106).